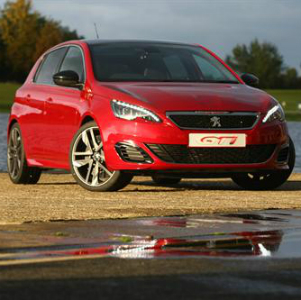 Ahead of the official UK launch of PEUGEOT’s performance model, the forthcoming 308 GTi by PEUGEOT SPORT, PEUGEOT UK took one of the first right hand drive production models in the country to the National Water Sports Centre in Nottingham for a challenge to demonstrate the new model’s sporting credentials.

Joining Peugeot at the 2000m lake was PowerboatGP – an organisation that stages a number of competition events and the annual F2 Nottingham Grand Prix championship at the National Water Sports Centre in Nottingham – who provided an F2 Powerboat. The two high performance machines were pitched against one another on two completely different surfaces.

Both have been developed to perform with great efficiency and with each having advantages for different elements of the challenge, the event revealed how closely matched the two machines were – the Powerboat, while quick off the start, was very closely matched by the highly-tractable 308 GTi car. While the Powerboat soon reached its terminal velocity, limited by surface conditions and wind direction, the GTi just kept accelerating, even on uneven surfaces, demonstrating the high levels of grip enhanced by its TORSENdifferential.

Both are agile and responsive, the Powerboat able to turn within a few lengths, the Peugeot able to change directions on demand too, albeit driving around the perimeter of the main lake at the National Water Sports Centre (in Nottingham) had the longer route to overcome.

Finally, though the specially developed Michelin 235/35 R19 91Y Michelin Pilot Super Sport tyres have much more friction than a propeller and therefore allows for greater propulsion, the boat is much lighter and smaller in frontal area, so has less to move in its quest for performance.  Equally, equipped with 380mm race-inspired brakes, it has the capability to arrest its speed should the need arise.

The film of the event is available now on Peugeot’s official YouTube channel, perfectly capturing the comparison, and in the process some compelling shots of the two enjoying their impressive performance capabilities.