FTA Urges Government To Press Ahead With New Crossing 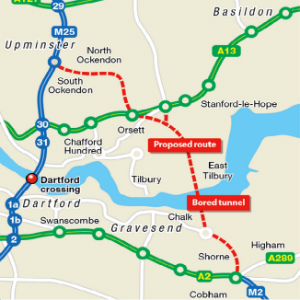 The Freight Transport Association (FTA) is urging the Government to press ahead with the new Lower Thames Crossing following today’s reports that Highways England is set to consult on Option C – a route linking the A2 east of Gravesend to the M25.

Consultation on the third crossing began in May 2013 when three options were announced. These were reduced to two in December 2013 – one close to the existing Dartford Crossing and the other connecting the A2 with the M25.

Now Highways England is understood to be pursuing just one – Option C – which the FTA favoured following consultation with its members. Malcolm Bingham, FTA’s Head of Road Network Policy, says it is vital that a schedule for delivery is put in place to prevent grid-lock on the existing routes.

Mr Bingham said: “Congestion at the Dartford Crossing is predicted to reach pre-Dart Charge levels by 2020 and the Blackwall Tunnel is a real pinch-point. Congestion needs tackling now and our members want to see plans in place to deal with future development and growth, not just temporary sticking plasters that don’t tackle the real issue.

Free-flow charging at the Dartford Crossing has improved traffic problems but congestion is predicted to get steadily worse so a long-term solution is crucial to provide extra capacity at this vital crossing.

Mr Bingham added: “FTA has consulted at length with its members, who concluded that Option C would bring the most benefits to the freight Industry and help tackle congestion at Dartford. Now this option has been chosen, we look forward to taking the detailed plans to our members once they are published.”