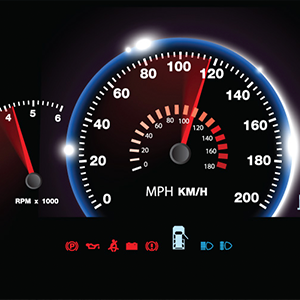 A new road safety campaign has launched today which proposes the radical adoption of a ‘fag-packet approach’ to UK speed limit signs. The suggested new tactic has already been backed by over half the nation, in the wake of research showing that millions of motorists ignore or don’t even notice speed limit signs in their current format.

That’s according to a new study from MORE TH>N which found that a whopping 62% of those surveyed admit they regularly ignore speed limit signs at present, with 25% also contesting that the threat of going to speed awareness isn’t a big enough deterrent from causing them to speed on a regular basis.

With this in mind, to mark this year’s Road Safety Week, MORE TH>N is launching a new road safety initiative which centres on calls to test the use of images of cars that have been in accidents as a visual accompaniment to existing numerical speed signs as a new means of deterring people from speeding on roads. The move has otherwise been labelled as applying the ‘fag-packet approach’ to the speeding epidemic, with a view to making people more instantly aware of the risks associated with their actions.

The new initiative also takes inspiration from previous, hard-hitting TV advertising campaigns that adopted a graphic approach to illustrate the dangers of speeding. The proposed new road sign initiative however would see this shock-factor concept placed in situ when people are actually behind the wheel, in what would be a UK first.

The new concepts of visual deterrent speed signs were tested with 2,000 motorists in a poll conducted by MORE TH>N, where they were backed by over half (58%) of those surveyed as potentially having a real impact on their driving, illustrating their possible value at helping make Britain’s roads safer.

So why were the signs effective in causing people to reduce their speed? Topping the list of reasons was the way in which they made people more tangibly aware of the dangers of speeding (67%), followed closely by the fact that they were so shocking (56%) and due to being more scared about crashing their car as a result (38%).

In the wake of the success of the initial research, MORE TH>N is now exploring possible follow-up activity with a view to securing an actual pilot of the signs on UK roads to test how effective they potentially are in causing people to reduce their speed, including approaching local police forces and pressure groups to garner further support for the campaign.

In addition to canvassing support for visual deterrents on speed signs, MORE TH>N also carried out research to provide a fuller picture of how people’s speeding habits vary across the UK. Specifically, the study found that 63% of Britons admit to regularly exceeding the speed limit each day, with one in 10 (10%) of those confessing to have picked up points in the past, as a result of being caught speeding behind the wheel.

Other key findings from the study included:

· 3% meanwhile have been involved in an accident as a result of their speeding tendencies.

Kenny Leitch, global connected insurance director, said: “At MORE TH>N, we want to help make Britain’s roads as safe as possible. We know parents and young drivers worry about their early driving experiences. We’re ensuring that our customer journey, communications and product design are all tailored towards promoting safe driving in a way that we know is likely make a real difference and change behaviour. Above all this is driven by our understanding of what really works, based on reputable behavioural science that ensures we’re looking after young inexperienced drivers by promoting safe driving in the most effective way.”

“While it may sound like a particularly radical idea to introduce visual deterrents alongside speed limit signs, our early research has shown that the adoption of a ‘cigarette-pack approach’ could be another way tap into the human motivations that can promote good driving and prevent speeding.”