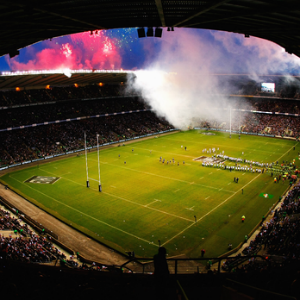 Home owners across the country could be earning extra income by renting out their unused parking spaces to sports fans during the upcoming Six Nations rugby tournament and other sporting events throughout the year.

Grenville Corke rents out the two spaces on his driveway in Twickenham close to the England national Rugby stadium, earning £15 for each car on event days. He said: “I normally rent out my parking space on big match and event days at Twickenham Stadium. A friend who lives close to me mentioned she was renting her parking space and suggested I do the same.

“There were some reservations initially, because I was having to collect the money from the “parkers” on the day and there was no guarantee they would arrive. However, since YourParkingSpace have arranged for collection and payment of the money everything has been going smoothly.All of the parkers I have met have been very pleasant and easy to get on with.”

North of the border in Edinburgh, Scott Robertson rents out a parking space close to Murrayfield Stadium.

“I first heard about the idea when reading a newspaper during my lunch hour. The article was discussing how popular the idea was in London, and I thought since we had the parking space close to Murrayfield we could rent it out for major events. I had no concerns whatsoever. Since the owners leave their contact details and prepay there should be no risk.”

Parking at sports venues and stadiums is in short supply and regularly gets fully booked in advance of an event. Those visiting a stadium could potentially save by booking parking with YourParkingSpace.co.uk. Car parking spaces around Twickenham Stadium listed on the website start at £15 per day whereas official car parks by the stadium can cost up to twice as much.

In Wales Mary Phillips, who lives a 15 minute walk from the Millennium Stadium, rents out two spaces on her driveway, charging £5 per day for each car. As a comparison, car parks in the area can cost up to £20 for a five hour stay.

“I heard about it from a neighbour who was renting out their driveway a couple of doors down from me. I mainly rent out the spaces when there are concerts on or match days but I’ll also get a lot of parkers who are staying in Cardiff for the weekend or visiting the area for the day.

“I had some concerns at the start, mainly if there would be any complications such as parkers not collecting their car on time and whether they’d be pleasant, but renting out the spaces through YourParkingSpace gives me peace of mind knowing that a company is there to help if there are any issues. It’s nice knowing that you’re helping out people but the real benefit is the extra income.”

Harrison Woods, managing director of YourParkingSpace.co.uk, said: “With parking at sports venues in such demand home owners could be earning significant amounts of extra income renting out their unused spaces. Not only that but those booking parking with our site could save money when attending matches.”

For more information on YourParkingSpace.co.uk or to find out about renting out unused parking spaces please visit https://www.yourparkingspace.co.uk.