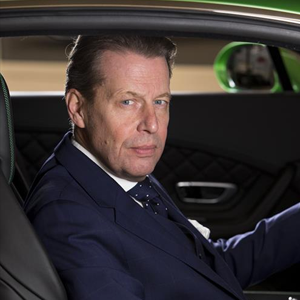 Bentley is today announcing that Director of Design, Stefan Sielaff, will also assume responsibility for its personal commissioning division, Mulliner.

Whatever a customer desires, Mulliner’s highly skilled and dedicated craftspeople – supported by the vast styling and engineering experience of Bentley – take a customer’s vision and turn it into reality.

Speaking about adding responsibility for Mulliner to his design directorship, Sielaff said: “The possibilities with Mulliner are essentially endless – there is nothing our skilled coachbuilders cannot achieve.

“I want to explore more one-off, bespoke vehicles where the only limitation is the imagination of the customer. Design and personal commissioning will go hand-in-hand and when that is the case, extraordinary things happen.”

Commenting on the appointment, Wolfgang Dürheimer, chairman and chief executive of Bentley Motors, said: “Exquisite styling and the ability to bring our customers’ visions to life has always made Bentley unique. Now, with Stefan Sielaff leading both teams, I am certain Mulliner will benefit strongly from his design leadership.”

Under Sielaff’s stewardship, the Bentley Design team has already begun to push the boundaries of car design and explore what the future of luxury will look like for Bentley customers.

For example, earlier this year they showcased their vision of the car that could define the electric luxury vehicle segment – the EXP 12 Speed 6e concept – at the Geneva International Motor Show. The show car demonstrated a natural evolution of Bentley’s design DNA, while at the same time signifying the brand’s future design direction.

Bentley’s design team are the current ‘Team of the Year’ title holders, awarded at the Automotive Brand Contest, hosted by the German Design Council. The judging panel praised the team’s ‘passion, expertise and joy’ in creating outstanding models, and noted how Bentley’s design approach is successfully future-proofing the luxury brand.

Sielaff joined Bentley Motors in July 2015 from his previous role as Design Director at the Volkswagen Design Centre, Potsdam. Born in Munich, he achieved a master’s degree in vehicle design at the Royal College of Art in London – an institute with which he still has strong connections.

Mulliner exists to respond to the requirements of Bentley’s most discerning customers. Any type of personalisation can be undertaken to create a unique Bentley of individual taste.

Recent examples of Mulliner’s craft include the Mulsanne Grand Limousine, with its one-metre stretch and private-aviation-style seating configuration in the rear cabin; and the Bentayga Falconry – the ultimate accessory for the falconry enthusiast – which features a bespoke installation in the rear with all the equipment required for a successful expedition.

Mulliner’s roots date back to the 1500’s – that’s almost 500 years of craftsmanship experience and heritage.

The firm’s original focus was creating luxurious horse-drawn carriages. In 1923 Mulliner showcased for the first time work on a Bentley chassis, exhibiting a two-seater 3 Litre Bentley at the Olympia Show in London – just four years after Bentley Motors was founded.

In 1953, Mulliner coachbuilt one of the most iconic Bentleys ever – the R Type Continental. This model inspired the design of today’s Continental GT. In 1957, Mulliner introduced the Continental Flying Spur, a special four-door saloon built on the Bentley Continental chassis. Mulliner officially became part of Bentley Motors in 1959, setting up its workshops in Crewe.