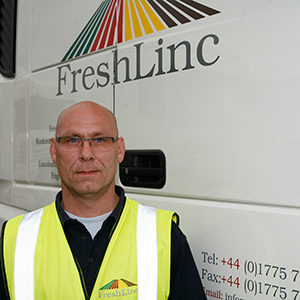 Shell have crowned the UK winner of the FuelSave Partner European Driver Competition 2014.

Frantisek Bogyi, from FreshLinc, will now go on to battle against some of Europe’s outstanding road haulage drivers in the grand final of the competition today in Berlin, Germany.

More than 1,100 road haulage drivers from across the continent have entered this year’s competition, which is run by Shell in cooperation with DEKRA Academy.

During the virtual assessment, DEKRA Academy worked with Shell technical experts to rank drivers based on the individual reports generated by their Shell FuelSave Partner advanced fuel management system.

The behaviours assessed across the four-week period included idling time, harsh acceleration, coasting, braking and use of cruise control.

Certain operational considerations, such as the terrain in which they operate, the type of vehicle they drive and the weight of load they carry, were also taken into account.

Andrew Tubb, Driver Development Manager at FreshLinc said: “We’re proud and delighted to have the UK’s most fuel-efficient driver in the Shell FuelSave Partner community at Freshlinc.

“We introduced Shell FuelSave Partner solutions across our fleet of 230 vehicles three years ago.

“It has enabled us to track vehicles’ fuel consumption and driver performance with enhanced reporting, and as a result, we have seen dramatic operational improvements, with the majority of our HGV fleet now achieving more than 10mpg when on the road.

“The competition is a great opportunity for us to demonstrate how far we’ve come as a company.”

Along with his Driver Development Manager, Mr Bogyi will now join fellow winners from Austria, Germany, Switzerland, the Netherlands, Belgium, Poland, Hungary, Denmark and Norway at the grand final.

The finalists will go head-to-head in a series of challenges designed to assess their fuel efficient driving skills and safe driving techniques.

Challenges will include live driving exercises designed to evaluate steering, braking and vehicle control and a DEKRA driving simulator test.

The winning company will be rewarded by having the opportunity to send more of their drivers on a one-day specialised eco-driving training course, while the individual winner will win a Ferrari driving experience.

Drivers that finish second and third will win a place on a Porsche driving challenge.

Phil Williams, Head of Commercial Fleet at Shell, said: “Our own tests at Shell have revealed that a few simple changes to driver behaviour can help fleet managers reduce fuel consumption significantly, so it was fantastic to see so many UK fleet drivers putting their fuel efficiency skills into practice.