Renault EV’s Go Back To Nature At The Eden Project 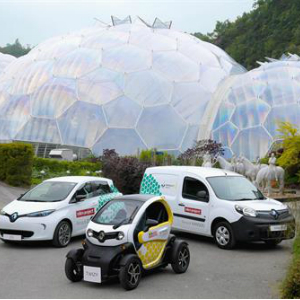 Renault’s innovative range of 100 per cent electric vehicles is set to be a familiar sight at The Eden Project with the strengthening of the longstanding relationship between Europe’s leading electric vehicle manufacturer and the world-famous UK tourist destination.

Following successful trials of Renault’s range of all-electric cars and vans that epitomise the brand’s commitment to the environment, Eden has welcomed 18 Renault EVs to its inspiring, Cornwall-based attraction.

At the forefront of electric vehicle (EV) technology for several years and with the ambition to provide everyone with access to affordable, sustainable motoring, Renault is the perfect automotive partner for The Eden Project. The arrival of the environmentally-compatible Renaults is particularly timely as Eden is wishing to place a greater emphasis on informing and educating its visitors about the benefits of electric vehicles in reducing carbon emissions.

To be used by its team throughout the site and also further afield in the promotion of the ever-popular tourist attraction and educational charity, Eden’s vehicles span the full spectrum of the Renault Z.E range and encompass the Twizy quadricycle, ZOE supermini and Kangoo Z.E in both Panel Van and Maxi Crew Cab body styles.

Renault’s significant presence at Eden will also extend to an interactive electric vehicle exhibit in the Core building – Eden’s exhibition, science and learning centre. To be hosted during the school summer holidays between 23 July and 4 September, the exhibit is designed to engage with visitors and provide them with an insight into the environmental benefits and workings of electric vehicles.

With zero tailpipe emissions and being near silent in operation, the Renault EVs are ideal for Eden. The vehicles work to preserve the site’s striking landscape and tranquil, back-to-nature atmosphere, while also offering the flexibility and versatility that its team require when operating vehicles in and around a complex and busy visitor destination.

The Renault Twizy is a perfect fit in more ways than one, its narrow width and compact dimensions enabling it to negotiate the entire pathway network of Eden and even be allowed to drive into the climate-controlled Biomes with their rainforest and Mediterranean horticulture. Eden’s Renault Twizys will be used by staff across the site.

The Eden Project will use two of its three Renault ZOEs to assist with visitor services, the design of the award-winning five-door hatchback making it suitable to transport less able-bodied visitors around the site. Thirteen Kangoo Z.Es – comprising of four Maxi Crew Cab versions and nine Panel Vans – will be used across the site by maintenance, horticulture, security, live programming and catering teams.

The supply of the increasingly popular range of Renault EVs follows Renault becoming the Official Car Partner of the Eden Sessions – a series of outdoor gigs, featuring some of the best acts in the world playing against the backdrop of the famous Biomes.

James Boyer, Marketing Director, Groupe Renault UK, said: “The partnership with The Eden Project is a fantastic endorsement for our passion to develop electric vehicles that are inspired by the environment. Renault’s revolutionary electric vehicles are the perfect fit for Eden and we are delighted that they will help demonstrate the many attributes of electric vehicles to thousands of visitors, delivering a peaceful and effortless drive through an ergonomic and simple design. Easy to charge and frugal in use, they will play a key role in the day-to-day running of The Eden Project.

“They also provide a superb electric vehicle experience that is within the reach of many – the ZOE having being recognised by What Car? as the ‘Best electric car on sale for under £20,000’ for the last three consecutive years and also being voted ‘Best Supermini’, and number two overall out of 150 vehicles, in the 2016 Auto Express Driver Power ownership survey.”

Rita Broe, Sales and Marketing Director at The Eden Project, said: “We are delighted to have strengthened our relationship with Renault and to have this opportunity to showcase a beautiful new fleet of electric vehicles at Eden. We are always keen to promote the benefits of electric vehicles in reducing carbon emissions.

“Having the Renault fleet hard at work across the site, as well as hosting a major interactive Renault exhibit at Eden in peak season, will help inform and educate our hundreds of thousands of visitors about the benefits of owning electric cars in a fun, engaging way. Our visitors are already very interested in seeing the vehicles – and the Twizys in particular are causing quite a stir!”

Ben Fletcher, Electric Vehicle Product Manager, Groupe Renault UK, added: “With the Renault Z.E range encompassing a variety of vehicles, The Eden Project will enjoy the convenience of having an electric vehicle that is suitable for the vast majority of their onsite requirements. In addition to offering environmental benefits, the vehicles’ highly attractive running costs will also contribute to lowering the site’s operational costs, while their flexible charging options and ease of use ensure they are immensely practical.”

For the UK market, the Renault Z.E offering comprises of the innovative, two-seater Twizy urban vehicle, Twizy Cargo that offers a load area of 180 litres and a useful 75 kg payload, the multiple award-winning ZOE five-door hatchback and the Kangoo Z.E and Kangoo Maxi Z.E vans that combine the same generous load capacity and options as the equivalent diesel versions with ultra-low running costs.

In 2015, Renault was the European market leader for electric cars, with ZOE, and also Europe’s electric van leader with Kangoo Van Z.E., and sold a total of 23,086 electric vehicles (including Twizy). ZOE is the second best-selling electric car in the UK representing one in five EVs sold. Renault has sold over 94,000 electric vehicles across the world to date.