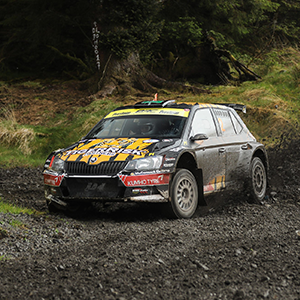 Having finished a fine third overall on the previous weekend’s British Rally Championship Pirelli Rally in Carlisle, the pairing of Marty McCormack and David Moynihan were hopeful of a strong result on last weekend’s (May 13) Donegal Forestry Rally.

And their wish was well and truly granted, with a memorable outright victory by the sizeable margin of over 1 minute 10 seconds for their TigerRisk Kumho-shod Skoda Fabia R5.

The victory leaves the duo joint fourth in the Irish Forest Rally Championship with three rounds to go, and just a handful of points away from the podium places of the British Rally Championship. Said Marty following the Donegal event: “It’s been a great day in the TigerRisk Skoda and to get the win is a big bonus, but the amount we have learned about the car in these conditions is invaluable and a great confidence boost heading into the Scottish Rally, where we need a good result to keep our British Championship hopes on track.”

Added Steve Thompson of Kumho Motorsport: “This was a truly dominant drive by Marty who made mincemeat of the tricky 17km stage through Tullnacarry, taking no less than 25 seconds out of his nearest rival. We wish him all the best with the coming rounds of both championships, as he is clearly in the groove right now.”