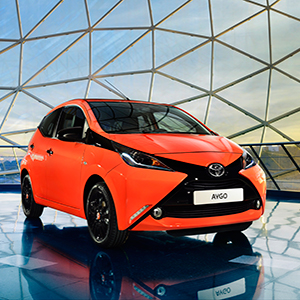 Toyota’s new Aygo will reap the benefits of cutting-edge engine technology, with its 1.0litre unit set to receive a fuel economy boost.

The vehicle’s three-cylinder petrol powertrain is one of a new series of Toyota engines which has been improved thanks to better thermal and combustion management.

It achieves a maximum thermal efficiency of 37% which, in combination with other fuel reduction measures, can deliver an improvement of almost 30% in fuel consumption.

This means the engine should achieve an estimated 68.8mpg fuel economy and CO2 emissions of 95g/km.

The version of the engine to be used in Aygo runs at a higher, 11.5:1 compression ratio than before, with the higher temperatures this creates countered by the adoption of a cooled exhaust gas recirculation system and adjustment of the engine’s valve timing.

More efficient combustion is achieved with help from a new-shape intake port and piston profile that create a strong tumble flow, with the air-fuel mixture moving in a more even, vertical swirl inside the cylinder.

The engine’s redesign has also made it even lighter, with features such as an exhaust manifold integrated into the cylinder head.

Significant reductions have also been made in the amount of energy lost through friction in the engine.

Worldwide, Toyota plan to introduce 14 new engine variations based on these units by 2015.