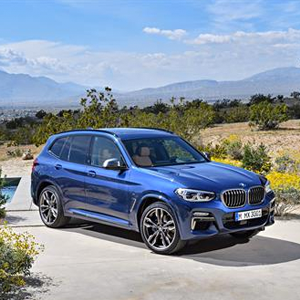 A new four-cylinder petrol engine will be added to the BMW X3 portfolio. In addition to BMW TwinPower Turbo technology, the 2-litre power unit also boasts a weight-optimised design and a new engine encapsulation system for optimising acoustic characteristics and warm-up behavior.

It comes as standard with the combination of an eight-speed Steptronic transmission and intelligent all-wheel drive technology, BMW xDrive. The engine featured in the new BMW X3 xDrive20i delivers a maximum power output of 184hp and a peak torque of 290Nm. The car’s sporty characteristics are reflected in an acceleration of 8.3 seconds from zero to 62mph, an exceptionally economical average fuel consumption of 39.8 mpg and CO2 emission levels 163g/km.

Also from December, the first ever M Performance X3 will be available. The new BMW X3 M40i sets new standards with its precise handling and high driving stability on every surface. It includes a number of model-specific features such as its M Performance exterior design package, with aerodynamic design elements finished in Cerium Grey.

Adaptive M suspension is available as an option, with an even wider spread of comfort and sport set-ups on offer. The eight-speed Steptronic Sport transmission comes with Launch Control. The transmission is a perfect match for the engine’s dynamic characteristics and can be operated using shift paddles on the steering wheel. In addition, its xDrive all-wheel-drive system has a far more pronounced rear bias than on the other model versions. The Performance Control feature is integrated into the DSC system and, acting on the rear wheels, is configured to produce the dynamism, agility and traction for which M Performance models have made their name.

Starting November 2017, the 190hp four-cylinder engine in the BMW X1 xDrive20d will come as standard with an eight-speed Steptronic transmission, allowing the compact SAV to accelerate from a standstill to 62mph in 7.8 seconds. Average combined fuel consumption of the BMW X1 xDrive20d is 60.1mpg and CO2 emissions 123g/km (figures as per EU test cycle, depending on selected tyre size).

Furthermore, the range of light alloy wheels optionally available for the BMW X1 will be upgraded. The choice will comprise five new variants ranging from 17-inch wheels with aerodynamically optimised turbine styling to 19-inch M light alloy wheels in a double-spoke design and bicolour optics.

Midlands Air Ambulance Charity has recently acquired a fleet of BMW X5 rapid response vehicles (RRVs) to complement operations in the sky. Situated at the airbases the BMW X5 xDrive30d vehicles are deployed if a helicopter is grounded, for example during the hours of darkness or a period of particularly bad weather.

On average five per cent of incidents Midlands Air Ambulance attends are via the RRVs, enabling the aircrew to continue to offer early medical intervention and save lives when the aircraft is not an option.

BMW Authority vehicles are specially equipped models only offered to the emergency services. All non-essential options are excluded from this special model whilst all safety and environmental features are retained. Special capabilities include an auxiliary battery system to power all emergency warning and communication equipment and it is supplied with the BMW X Drive Four-Wheel-Drive system enabling this vehicle to be operated in hard to reach locations. This model has a zero to 62mph time of 6.8 seconds, a maximum speed of 130mph and a combined efficiency of 40.9mpg.

To take full advantage of the space and maximise clinician’s time efficiency at the incident scene, research went into the medical setup within the vehicle. Utilising West Midlands Ambulance Service’s communications equipment, the BMW vehicles included programmed navigation, providing incident route information and a full radio set up. There is room for the driver and two passengers, while the remainder of the vehicle has been modified to carry lifesaving equipment.

Becky Steele, air operations manager for Midlands Air Ambulance Charity, highlights the decision to invest in the BMW X5 series model: “The X5 is a tried and tested rapid response vehicle for the emergency services. Its large interior is perfect for a bespoke medical equipment fit out, while the model’s advanced capability means it is a reliable asset, ensuring our clinicians tend to incidents swiftly and safely. Our medical crews are trained to the highest standard and these high-tech vehicles complement our operations perfectly. Thanks to their capability and the kit on board, they are already enabling us to save even more lives across the region.”

Double win for BMW at the 2018 Parkers New Car Awards.

The BMW 3 Series iPerformance Saloon has once again trumped its competition and has been named Best Company Car by Parkers. Based on the buying habits of the website’s 2.9 million users actively involved in the car buying process, the BMW 330e M Sport was commended for offering sleek looks and a superb driving experience in a package that offers drivers affordable running costs thanks to its plug-in hybrid technology.

Speaking of the win, Keith Adams the editor of Parkers , said: ‘The fact you see so many BMW 3 Series models with the subtle 330e badging tells you all you need to know – this is a plug-in hybrid that’s desirable enough to want without having to justify it. Considering the 3 Series range is entering its twilight years, its excellence is all the more remarkable.’

Not content with the one award, the BMW 5 Series Touring was picked as the jewel of the range, taking home the accolade for Best Large Family Car. Fighting off stiff competition from all areas of the industry, the 2017 BMW 5 Series Touring took home the gong for its versatility, in-car technology and class-leading driving experience.

In the Parkers review of the BMW 5 Series Touring, the team concluded: ‘It handles beautifully, is comfortable, and has all the engine and trim options you can shake a stick at. With all the thoughtful improvements, a lot of small upgrades have resulted in a very competent car. Is it the perfect large estate car? Pretty much’.

BMW crowned Fleet Manufacturer of the Year for the seventh year at BusinessCar Awards 2017.

BMW UK has scooped three awards from one of the country’s leading fleet publications including the headline accolade of ‘Manufacturer of the Year’, for the seventh year in a row, in recognition of BMW’s diverse product portfolio and class-leading running costs.

The BMW 5 Series was awarded Best Executive Car and New Company Car of the Year, as voted by the readers. Debbie Wood, BusinessCar’s editor, said: “The BMW 5 Series is one of the most celebrated and popular company cars here in the UK and although the D- segment is, as a whole, in decline, the 5 Series has bucked the trend and remained a popular choice in the company car market.”

“Long regarded as the best car to drive in its sector, this latest 5 Series also takes a step forward in terms of refinement and comfort. Proving a big hit with the judges and BusinessCar readers, the 5 Series remains the one to beat in the executive car class.”

The BusinessCar Awards were judged by a panel of industry experts, while a selection of fleet managers helped to decide the overall winners in the headline award categories. Well-known motoring editors, experts in residual values and the chairmen of both ICFM and ACFO also joined the panel.