Mitsubishi Eclipse Forecast To Be Amongst Best 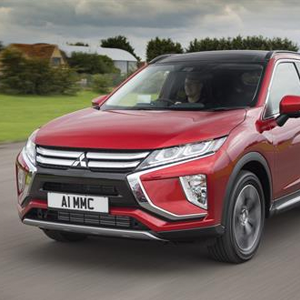 The all-new Mitsubishi Eclipse Cross will offer some of the very best residual values in its segment, according to industry experts cap hpi, when it launches in the UK in January.

It is also one of the strongest results ever achieved by the brand’s vehicles in the UK, an indication of Mitsubishi’s growing reputation as a manufacturer of high-quality and desirable SUV and 4X4 vehicles.

The news follows the announcement of the Mitsubishi Eclipse Cross’s highly competitive pricing, which starts at £21,275 OTR, giving cost-conscious drivers even more reason to consider the new SUV.

Also highlighting the Mitsubishi Eclipse Cross’s value is the availability of a version that combines a petrol engine, automatic transmission and four-wheel drive for £25,350 OTR – the most affordable vehicle of its type in its class.

Lance Bradley, Managing Director, Mitsubishi Motors in the UK, said: “We are delighted with these results. With the addition of the Eclipse Cross to our range we are able to offer our customers even more choice, providing them with a very attractive package that not only features a comprehensive specification that combines convenience and safety, but is also highly affordable.”

The Mitsubishi Eclipse Cross represents a bold new direction for the brand and is the first of a new generation of models that will position the manufacturer as a leader in the SUV market. It has been developed with a focus on three core areas – inspiring design, driving dynamics and technology.

The Mitsubishi Eclipse Cross offers a choice of three trim levels – 2, 3 and 4 – with, depending on version, either two-wheel drive or four-wheel drive. From launch, all variants are powered by a 1.5-litre turbocharged petrol engine, mated to six-speed manual or all-new eight-step CVT automatic transmissions. A 2.2-litre diesel engine will follow in 2018. The range is priced from £21,275 OTR with the top-of-the range 4 version starting from £24,975 OTR.