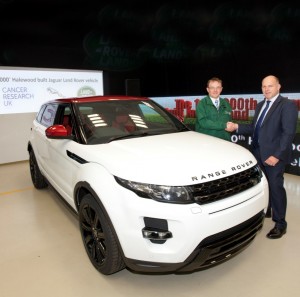 Jaguar Land Rover are celebrating the production of the one-millionth vehicle at their Halewood plant.

The milestone vehicle, a Range Rover Evoque painted in a special one-off colour combination, will be donated to Cancer Research UK.

Around 220,000 Range Rover Evoques have been built at the plant in two years, with other vehicles under production since 2001 including the X-Type and Freelander 2.

Production volume at Halewood has increased significantly over the past 12months due to 24hour working, bringing the arrival of the millionth vehicle ahead of original forecasts.

Richard Else, Operations Director at Halewood, said: “We are delighted to be celebrating this huge milestone for Halewood.

“This unique Evoque looks stunning and is a one-off vehicle that will raise money for Cancer Research UK projects here in the North West.

“Over the past few years many of the families of my growing team have been impacted by various forms of cancer.

“This milestone vehicle, built with pride at Halewood, will help raise much needed funds to help eradicate this dreadful disease.”

Cancer Research UK will be placing the donated Range Rover Evoque in a special auction event in 2014.

Details of the event will be revealed in the New Year, with funds raised from the vehicle then spent on projects in the North West of England.

Simon O’Leary, Head of Volunteer Fundraising at Cancer Research UK, said: “We are incredibly grateful to Jaguar Land Rover for thinking of us and making such a generous gift.

“Cancer Research UK receives no government funding for its life-saving research, so every step we make towards beating cancer relies on every pound donated.

“The money raised by the auction of the car will make a real difference in the fight against cancer.”