IGNIS In The Final Three For Car Of The Year 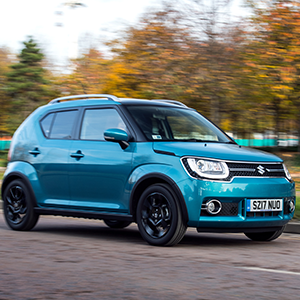 Suzuki is pleased to announce that the IGNIS has made it to the final three cars in the new  Urban Car category of the 2017 World Car of The Year.

To qualify for the initial judging process, vehicles had to be less than four metres long, suitable in design for everyday use in an urban environment and also on sale across two Continents by the deadline of Spring 2017.  At 3.70 metres in length, the IGNIS Mini Crossover  qualified and was shortlisted earlier this year.

World Car of The Year (UK Vice-Chair) Mike Rutherford comments: “Suzuki has seen off many rival manufacturers from all corners of the globe to become a 2017 World Car finalist.

As our 70-plus jurors have decided and as I have long suspected, Suzuki builds some of the finest small cars on the market – thus its official position as a finalist from the initial group of eight of which two were Suzuki models, IGNIS and Baleno. IGNIS was voted into the shortlist   of five in January and now its through to the final three. The company may yet go on to lift the World Urban Car trophy at the New York International Motor Show on April 13th.”

The new IGNIS was first launched in the Japanese domestic market, unveiled for Europe at the Paris Motor Show last Autumn and went on sale in January 2017. In addition to its stylish exterior design it features excellent visibility, compact dimensions and a spacious cabin with ample luggage space. It continues to be very popular with customers in the UK with sales of more than 1,500 already since January.

The SZ5 model offers the latest in safety technology with stereo cameras monitoring the distance between the vehicle and other objects. This new technology is the basis for three advanced safety functions: Dual Camera Brake Support (DCBS), Lane Departure Warning, and Weaving Alert.