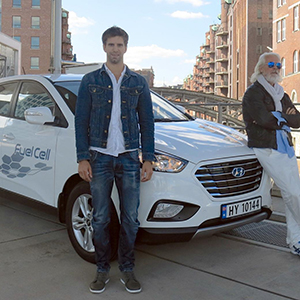 Two hydrogen pioneers have taken real-world zero-emission motoring to a new level by driving a Hyundai ix35 Fuel Cell 2,383 kilometres in 24 hours. Arnt-Gøran Hartvig (Sports Scientist) and Marius Bornstein (Master of Physics) travelled around the clock on public roads in Germany, emitting nothing but water vapour from the ground-breaking fuel cell electric vehicle.

To achieve this impressive distance, the two Norwegians covered the +300-kilometre route between Vatenfall’s hydrogen station in HafenCity, Hamburg and a Shell hydrogen station in Sachsendamm, Berlin as many times as possible in 24 hours. Refuelling the car takes as little as three minutes, enabling the drivers to maximise the distance covered.

Hartvig and Bornstein’s success was fully captured on GoPro cameras, and can be viewed at https://www.youtube.com/watch?v=AYUbIdHr7aE.  Their route included city driving as well as high-speed roads, demonstrating the suitability of the Hyundai ix35 Fuel Cell for everyday use in all situations. “We wanted to see what the combination of a state of art fuel cell electric vehicle and hydrogen refueling station are capable of today. The result is stunning,” stated the team after accomplishing their journey.

This accomplishment by the two eco-pioneers is the latest in a series of epic challenges to showcase the potential of fuel cell technology. In June last year the duo chose the ix35 Fuel Cell to travel a record 700 kilometres on one tank of hydrogen. They have also driven from Oslo to Monaco, refuelling only at the hydrogen stations already installed along the 2,260-kilometre route.

Thomas A. Schmid, Chief Operating Officer at Hyundai Motor Europe, commented: “This endurance drive highlights both the practicality of our fuel cell electric vehicle’s long driving range and the environmental credentials of our technology. Our Fuel Cell programme has already delivered many world firsts, so it is fitting that the Hyundai ix35 Fuel Cell has once again delivered a new benchmark.”

Hyundai Motor is the world’s first automotive manufacturer to mass-produce fuel cell vehicles and make them commercially available. The ix35 Fuel Cell is the most affordable fuel cell vehicle in Europe and is already on sale and on the roads in 11 European countries.

The ix35 Fuel Cell is fitted with a 100 kW (136 ps) electric motor, allowing it to reach a maximum speed of 160 km/h. It produces no harmful emissions – only water vapour comes from the tailpipe – and has an official driving range of almost 600 kilometres on one tank of hydrogen. More information about Hyundai’s innovative fuel cell technology can be found at www.fuelcell.eu.

Drivers could face fines of £130 for minor driving offences as the Government considers handing local councils new powers to improve roads for cyclists and pedestrians. Motorists

TruckEast, Scania’s dealer for East Anglia, has been awarded

A specialist range of LED driving and working lights

Steer clear of the cheap fl...

As businesses start to take tentative steps out of