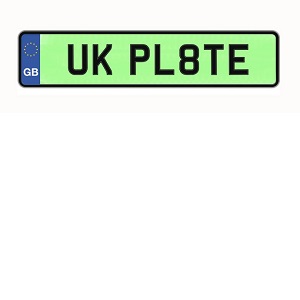 Clean cars, vans, and taxis could be equipped with green number plates under new plans to promote awareness of ultra-low emission vehicles.

The special plates, which are already used by countries like Norway, Canada, and China, could be available on green vehicles like electric and hydrogen cars, and are thought to encourage take-up among drivers.

The plans are part of a forthcoming government consultation announced today (9 September 2018) which will seek views on whether green plates could work in the UK, and if so, what they should look like.

The consultation could pave the way for the addition of the eye-catching plates to UK vehicles in the next few years.

It comes ahead of the UK hosting the world’s first Zero Emission Vehicle Summit this week, where nations from around the world will come together to agree to support the development of and acceleration in uptake of green vehicles

The UK has a proud history of leading the world in technological advances and that is no different for ultra low emission vehicles, where we are at the forefront of innovation and testing.

This new cleaner, greener transport has the potential to bring with it cleaner air, a better environment and stronger economies for countries around the world.

Adding a green badge of honour to these new clean vehicles is a brilliant way of helping increase awareness of their growing popularity in the UK, and might just encourage people to think about how one could fit into their own travel routine.

We support efforts to increase awareness of the numbers of clean vehicles on our roads. Simple changes based on behavioural science can have a big impact.

Green plates would be more noticeable to road users, and this increased attraction can help normalise the idea of clean vehicles, highlighting the changing social norms around vehicle ownership.

The consultation will consider potential designs for the plates, which could include entirely green on the front, back or both sides of the vehicle, or a green symbol.

The Prime Minister originally announced that the UK would host the Zero Emission Vehicle Summit earlier this year and Theresa May will deliver an address at the event on Tuesday (11 September 2018).

The summit will be taking place in Birmingham and Buckinghamshire on 11 and 12 September, bringing together nations from across the globe to pledge collective action towards zero emission journeys and showcase how the UK is one of the best places in the world for zero-emission innovation.

The work is all part of the government’s Future of Mobility Grand Challenge, outlined in its modern Industrial Strategy, aiming to help reduce greenhouse gas emissions, make travel safer, improve accessibility, and present enormous economic opportunities for the UK.

The Zero Emission Vehicle Summit follows the Road to Zero strategy which was published earlier this summer and outlines the government’s ambition to lead the world in the development and manufacturing of zero emission vehicles.

Commenting on the Department for Transports consultation on equipping electric and ultra-low emission vehicles with green number plates, Edmund King, AA president says; “Green registration plates are used in places across the globe from Beijing to Oslo and Ontario to denote electric vehicles.

“As the number of green plates increases it could help convince previously sceptical drivers that electric vehicles work.

“It could also be an easier way to implement incentives for electric car ownership such as free or preferential parking.

“However, we believe drivers should be able to choose whether they opt for a green plate in the same way that they may currently opt for a GB or Euro symbol on their number plate.

“Drivers shouldn’t be forced to display their green credentials on their number plate.

“The plates would also need to be compatible with safety requirements and ANPR, speed camera technology.”

“It can be hard to tell the difference between zero-emission models, hybrids and those still running on fossil fuels and consumers are confused by the range of ‘green’ and ‘not so green’ technologies on offer. This simple badge could help provide much needed clarity, making ‘clean’ technologies instantly recognisable.

“It’s a brilliant example of ‘nudge theory’ – the use of a simple prompt to influence behaviour. Green number plates may well encourage people to  reconsider the type of vehicle they chose to buy next. They will also give drivers of green number plate cars the warm glow of having made the right choice and public recognition for aligning themselves with a worthy cause.

“Millennials are famously socially-minded  and ethics and social responsibility have become legitimate consumer concerns more broadly. Brand are responding by adopting ethical practices; some are reducing their use of plastic while last week Burberry’s announced it would stop burning unsold clothing. A positive automotive story couldn’t come at a better time for an industry that really needs some good PR In the wake of recent emissions scandals.

“Green number plates would also help car manufacturers to differentiate themselves in an increasingly homogenous market and may also support the government in reaching the tough carbon emissions targets is has set itself in the coming decades.”