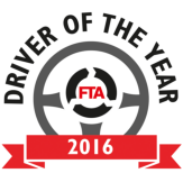 The Freight Transport Association (FTA) has announced the launch of its FTA Driver of the Year 2016 Competition.

Following the hugely successful previously held Van Excellence Driver of the Year events, FTA has introduced three separate contests celebrating the skills and abilities of professional drivers across the freight and logistics sector.

Contestants taking part in each of the events will be asked to complete various tasks in the competition designed to test their abilities across a wide range of skills.  Throughout the day drivers will be assessed on their overall competence behind the wheel.

Last year’s Van Excellence competition winner – Dave Lucas is a driver for the London Borough of Redbridge who is said to be still “buzzing” after taking part in the 2015 event, adding “it was a terrific day and to win the overall prize was one of the best experiences of my life.”

Commenting on Dave’s success – Eddie Cross, Head of Transport Engineering Service at London Borough of Redbridge said: “For any fleet, compliance is key, and what better way to demonstrate your compliance than having the Van Excellence standard? Of course, as with any accreditation standard it’s easy to become complacent so you need to keep staff engaged. A competition internally or externally is one of the best tools a manager has, it’s an even bigger motivator when your man wins the main competition. From a corporate standpoint to have Dave win the overall prize helps keep Transport Services at Redbridge at the forefront of what can be achieved in the current climate of budget cuts. Well done to the FTA for organising such a terrific event.”

Elements of the competition will examine driving skills (fuel economy and driver behaviour), manoeuvring ability, the drivers’ risk awareness, checked legislative knowledge, and ability to identify pre-use defects of the vehicle. Contestants will be scored on each task and ranked based on their scores.

David Wells – FTA Chief Executive added:  “Following the hugely successful Van Excellence Driver of the Year events held over the past two years, FTA is delighted to announce that it has introduced three separate events to celebrate the work of professional drivers in the freight and logistics industry.  The FTA Driver of the Year Competitions will highlight the fantastic work they do.  I would like to take this opportunity to wish all those who enter the very best of luck.”

To nominate a driver to enter the 2016 FTA Driver of the Year competition – please go to:www.fta.co.uk/driver16