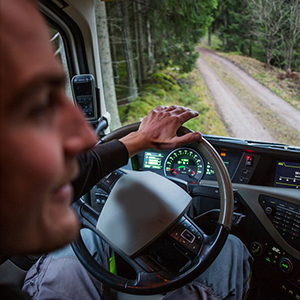 FINE: Plans aim to clamp down on tired truckers

Foreign truckers who put lives at risk by driving tired on UK roads will be slapped with on-the-spot fines under new government proposals.

All hauliers who drive for longer than legally permitted currently risk a fine, but penalising non-UK truckers has proven difficult since they cannot be issued with a court summons.

A consultation launched by Roads Minister Stephen Hammond will scrutinise proposals to give enforcement officers the option of giving them an on-the-spot fine instead of taking them to court.

The proposals – which would mean officers could issue a penalty for offences committed up to 28 days after an offence – would also allow enforcement of the new HGV Road User Levy for similar periods.

Enabling historical drivers’ hours offences to be enforced would bring the UK in line with other EU member states.

Mr Hammond said: “Tired drivers are more prone to accidents, which is why there are limits on the number of hours hauliers can drive.

“Sadly a selfish minority ignore this, putting others’ road safety at risk.

“The option to issue a fine for this offence would provide an effective weapon in the fight against irresponsible driving by both foreign and UK drivers.

“This and the fact we introduced the new HGV Levy earlier this year shows we are determined to ensure UK drivers and their foreign competitors are on a level playing field.”

The Freight Transport Association (FTA) said they welcomed the move.

Karen Dee, Director of Policy at the FTA, said: “Rules and regulations are only effective if they can be enforced properly and we are pleased that the government is consulting on some new ways of achieving this.

“At the moment, any drivers’ hours offences that become apparent through scrutiny of the records, but that are not actually being committed at the time of the stop, cannot be dealt with by way of a fixed penalty.

“As a result it is difficult to enforce for those drivers and operators that are not resident in the UK.

“On-the spot fines are a well-established and effective way of ensuring that visiting operators and their drivers are held to account for any infringements, so it makes sense that the government is looking to use this mechanism.

“FTA will now look closely at the detail of the proposals with members.”

The consultation runs until August 11.