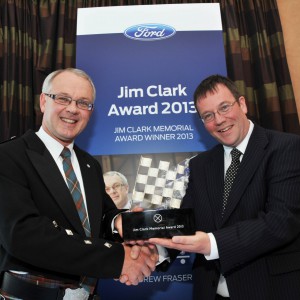 Ford engineer Andrew Fraser has been awarded the Association of Scottish Motoring Writers’ (ASMW) Jim Clark Memorial Award for his work on the EcoBoost engine.

The award, this year presented at a special celebration dinner in Troon on June 3, recognises Scots who have excelled in the fields of motorsport and automotive development.

Mr Fraser said he was delighted to pick up the accolade.

“I am proud to follow in the footsteps of Scottish legends such Jim Clark, Sir Jackie Stewart and Colin McRae,” he said.

“Our objective with the 1.0-litre EcoBoost engine was to deliver an engine with no compromises – providing best-in-class fuel economy, outstanding driveability and excellent refinement.

“Customer response has been overwhelming and to receive this prestigious award in recognition of this achievement is tremendous.”

Handing over the accolade, Alisdair Suttie, President of ASMW, said: “It gives the ASMW enormous pleasure to present Andrew Fraser with this year’s trophy.

“His work is not only at the leading edge of engine development, it has a global impact on the cars we drive.

“Once again, it shows Scots engineers are still the best in the world.”

Mr Fraser was born in Perth in 1964, attending the George Heriot’s School in Edinburgh before going on to study mechanical engineering at Edinburgh University.

He joined Ford in 1986, working in the UK and USA on petrol and diesel engines, before being made Gasoline Powertrain Development manager in 2006.

The Jim Clark Memorial Award is in memory of the Scot who, in a Lotus 49 at the Dutch Grand Prix in 1967, gave Ford its first ever Formula One win with the new Ford-Cosworth V8 Grand Prix engine.

Now in its fifth decade, the award is presented annually to a deserving Scot by the Association of Scottish Motoring Writers.