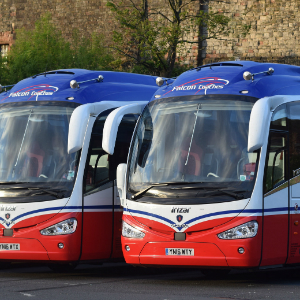 Luxury coaches are highly specialist and expensive vehicles to purchase. As such, operators look after them carefully and often run them for longer than other commercial vehicles. This means many top-end PSV’s still have analogue tachographs and many fleets have a mixture of both analogue and digital records to analyse, potentially creating an administrative and compliance nightmare.

This was exactly the situation Middlesex-based Falcon Coaches and their subsidiary Tellings Golden Miller were in, but then as CPT members they discovered CPT Tacho Analysis by TruTac.

Operating across the South East from a depot near Heathrow, Falcon Coaches has strived to deliver the highest standards of service to its passengers for over 50 years. Managing Director Richard Telling, son of original founders Stephen and Christine Telling, first came across TruTac at the Coach and Bus Show in October 2015 and moved his company over from their original software provider within a couple of months.

“No-one else was offering a system where our drivers could simply scan their charts in any order and the software provider would then enter the centrefield information” Telling explains. “Our previous system was incredibly labour intensive because someone had to sit in front of the computer and enter the data manually.” The company runs 22 coaches, of which 14 are analogue, so this was no small task. “We’ve saved two days’ work for one person using CPT Tacho Analysis, so it’s a big improvement” he confirms.

But this isn’t just about man-hours, Falcon’s move to TruTac software is about being green as well – before, there was a huge amount of paperwork involved with keeping compliance records straight, whereas now it’s all on computer. “That’s why we started using TruChecks, their daily walkaround checking system as well; to save admin resource in reconciling defects and walk round checks” he says.  Telling started rolling out the smartphone-based defect reporting app to selected drivers around two months ago and is now expanding its use across the whole workforce.

One of the biggest concerns many people have when considering a change in software provider is having to spend a long time familiarising themselves with the new system, but Telling says that hasn’t been an issue with either CPT Tacho Analysis or TruChecks. “It didn’t take much training to get used to the system” he confirms.  “The guys at TruTac have been really helpful, and when we did have a few issues early on, they quickly sorted things out” Telling concludes.  “All in all, the transition has been very simple.”