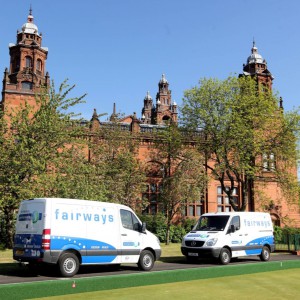 Two Sprinter 313 CDI vans are being run by the company’s Fairways Sportsgrounds division, as well as a smaller Citan 108 CDI.

The vans are already preparing the lawns at the Kelvingrove Bowling Centre for the Commonwealth Games next summer.

Dave Gibson, Contracts Director at Fairways Sportsgrounds, said: “Our previous Sprinters have served us extremely well so we had no hesitation in choosing more Mercedes-Benz vehicles.

“We were keen to maintain a consistent corporate image, by having the same smart, professional-looking vans across our divisions.

“But we also wanted vehicles which would be reliable and safe for our operatives, as well as offering low operating costs and coming with the safety net of high quality support from a local dealer.

“The Sprinter ticks all of those boxes.”

Fairways Sportsgrounds won the tender in 2011 to reconstruct and then maintain five lawn bowling greens next to Glasgow’s Kelvingrove Art Gallery & Museum.

Commissioned by Glasgow City Council, work on the site has included constructing international-standard greens and new ditch channels, installing an irrigation system and creating a network of pathways.

Fairways have also provided a specialist greenkeeper, Craig Collins, who is permanently stationed at the site.

“We regularly attend many sports venues, although the Kelvingrove Bowling Centre is certainly the one which is under the most scrutiny right now,” added Mr Gibson.

“We also travel to sites across Scotland, and into England as far south as Leeds, so our teams need to be mobile and to have all their maintenance equipment, tools and spares to hand.

“Our operatives are delighted with their comfortable, reliable, safe and economical Sprinters.”