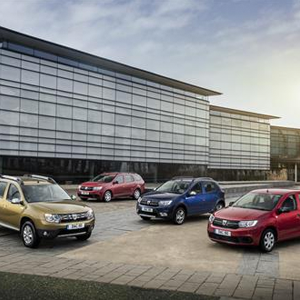 The offer spans the full, recently updated range of award-winning Dacia models, ensuring drivers can own a brand new hatchback, estate, compact crossover or SUV for a lot less than they may have thought. The offers applies to orders placed before the 30th September 2017 for cars registered until the 31st December 2017. The free five year warranty, usually worth up to £395 as an upgrade, replaces the standard three year warranty.

Attracting a deposit contribution of £1000 for diesel versions and £500 for petrol models, the rugged and award-winning Duster, refreshed for 2017, is a highly tempting proposition to savvy SUV buyers. Purchased though a four-year Dacia Dimensions PCP package, the Duster in Ambiance 1.6 16V 115 specification is available from only £149 per month once customers have put down a deposit of £1,780 and also comes with the free five year extended warranty.

Recently announced as one of the UK’s most affordable cars to own and run, and What Car? magazine’s ‘Best Small Car for less than £12,000’ for the fifth consecutive year in 2017, the neatly-packaged Sandero is now even more accessible. Via the four-year Dacia Dimensions PCP deal on the Ambiance SCe 75 model, the practical five-door hatchback can be purchased for as little as £89 per month with a customer deposit of £1,485 with the free five year extended warranty.

Drivers that want a small crossover will want to check out the latest Sandero Stepway offers. Available with a £600 deposit contribution for diesel versions when bought on a four-year Dacia Dimensions PCP deal and £400 on petrol versions, the popular crossover costs from only £99 per month with a deposit of £2,370 for the Ambiance TCe 90 version with a free five year extended warranty.

Equally big on space as it is on value, the Logan MCV comes with a £400 deposit contribution when purchased on a four-year Dacia Dimensions PCP deal. With a £2,078 deposit, customers can experience the model’s versatility and spacious interior from only £99 per month with a free five year warranty.

Dacia has sold more than 100,000 vehicles in the UK since it was launched here in 2013 with more than 4.5 million Dacias sold since the brand was relaunched by Groupe Renault in Europe in 2004.