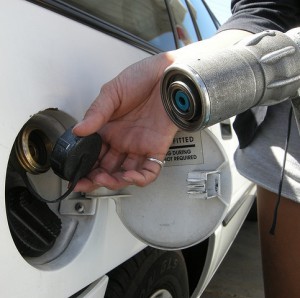 Environmental peace of mind and financial advantages are the two key plus points of the switch, with 50% less nitrogen oxides and 17% less carbon dioxide produced compared to petrol.

On the financial front, LPG vehicles provide annual cost savings of around 40% compared to petrol for car and van owners.

Clear Channel clean, maintain and repost 60,000 bus shelters, billboards and other advertising sites across the UK.

Indeed, with a lot of their fleet operating in urban areas at night, the quietness of the autogas LPG vans is a further bonus, they claim.

Glenn Ewen, Fleet Manager at Clear Channel UK, said: “As part of our wider strategy to minimise our impact on the environment, Clear Channel UK has set a target of 84% LPG usage against petrol for 2013.

“As part of our commitment to this target, we have installed seven bunkers at Clear Channel depots nationwide where our drivers may refuel.”

Paul Oxford, Business Development Manager at Autogas Limited, added: “Businesses across the UK are finding for themselves the many advantages of converting to autogas LPG.

“For some it’s the environmental angle while for others it’s the significant cost savings, although normally it’s a mixture of both.

“However, it’s not every day that we hear that one of the reasons is because autogas LPG vans are quieter; although that’s a valid enough reason by itself.”

Image courtesy of David A. Villa, with thanks.