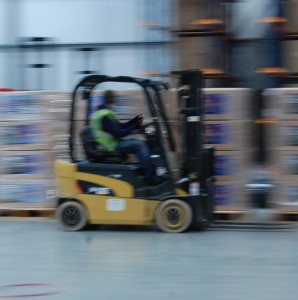 A Cheshire cheese company have been fined £8,000 for safety failings after a worker fell from a forklift’s prongs during an unsafe loading operation.

The injured worker, Chester Magistrates Court heard, had been helping to load cheese onto a wagon, balancing on the prongs of the forklift.

He was being lifted up to the vehicle, with one foot on each fork, when they hit the back of the HGV and jolted.

The man fell around a metre to the ground below, suffering cuts to his left leg and several ankle fractures.

A Health and Safety Executive (HSE) investigation found it had become common practice for people to be lifted on forklift prongs – despite it being illegal.

The Court was told no risk assessment had been carried out for the work and no other method for accessing the wagons was available.

Jane Carroll, Inspector at HSE, said: “The injuries suffered by the worker could easily have been life-threatening had he struck his head when he fell.

“His employer regularly allowed workers to stand on the forks on forklift trucks, despite this being illegal and posing a clear risk.

“Joseph Heler failed to give its employees any guidance on how they should access and load the wagon, and failed to put systems in place to make sure the risk of injury was minimised.”

Image courtesy of toolstop, with thanks.