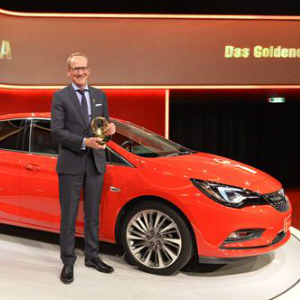 A jury consisting of readers, experts and celebrities pick the best newcomers each year after extensive test drives.

“We at Vauxhall/Opel can be extremely proud of this Golden Steering Wheel. It proves that all of our efforts have paid off. The new Astra is synonymous for lightweight, highly-efficient engines, better packaging, features from the luxury class, trendsetting connectivity and exemplary quality,” said a jubilant Dr Neumann at the award ceremony.

Opel’s CMO Tina Müller added: “We have already received more than 40,000 orders for the new Astra. And now we have won this very special prize. We can all be delighted with it.”

Built at Vauxhall’s Ellesmere Port plant in Cheshire, the new Astra is up to 200kg lighter than the outgoing model and thanks to its clever design it is smaller on the outside and bigger inside.

The powertrain portfolio features petrol and diesel units ranging from 100PS to 200PS, including an all-new 1.4-litre (145PS) ECOTEC Direct Injection Turbo, a four-cylinder unit from the same family as the one-litre, three-cylinder engine seen in Corsa, ADAM and VIVA.

Equipped with OnStar, the first all-new Vauxhall to feature this technology; this includes high-speed 4G LTE mobile network, emergency response notification and stolen vehicle recovery technology. It is also one of the first vehicles from a mainstream manufacturer to get Apple CarPlay and Android Auto, available through a new version of the IntelliLink infotainment system.