Back to the Future Today 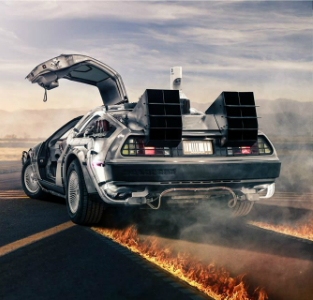 Today is the future we’ve all been waiting for! In the 1989 Movie Back to the Future:Part II, Doc Brown and Marty McFly travelled to this date: 21st October 2015, and today we get to see if we’ve come as far as we thought we would.

If Marty Mcfly was right we would all be flying around on hover boards and our shoe laces would tie themselves, unfortunately not all of the predictions about 2015 from the film came true and our cars are not time-machines…yet!

The first DeLorean car was rolling off the production line in Belfast, Ireland 4 years before Doc Brown fitted it with a flux capacitor, the car was the brainchild of Automotive visionary John DeLorean who worked for Chrysler, Packard, Pontiac and Chevrolet before setting up his own company. The car was designed by Giorgetto Giugiaro who’s traditionally angular style was used for the original Volkswagen Golf, Maserati Bora and BMW M1. Giugiaro was named car designer of the century in 1999.

Only 9,000 DeLorean DMC-12 cars were ever made, 2 of which were gold plated whilst the rest were brushed steel (unpainted) Production was stopped in 1983 due to a slump in the US car market unfortunately sending the company into liquidation.

The DeLorean had a 2.7 litre PRV fuel injected V6 engine and went from 0-60mph in 8.8 seconds. It is reported that it had a top speed of 121mph although the speedometer could only go upto 85 due to restriction in the USA. The gull-wing doors became iconic and forever associate with the film, only 3 of the 6 cars used for the movie still exist.

So how close are we to what BTTF predicted? Well we cant time-travel, hover-boards aren’t widely available (although Lexus are working on it) and thanks to Google we do have smartglasses (the film predicted JVC would get there first) Perhaps in another 26 years we’ll finally have the flux capacitor.