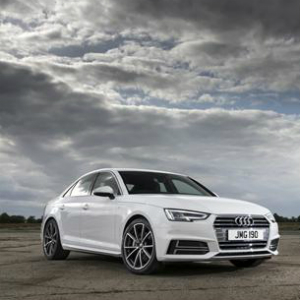 Appreciably more accomplished, significantly more intelligent and now multi-award winning – the widely lauded Audi A4 has added the top Car of the Year accolade in the Contract Hire and Leasing Awards for 2015 to its already impressive cache of honours. The all-new compact executive star also secured the Compact Executive Car category award as part of the annual review of star cars conducted by respected UK car finance site ContractHireandLeasing.com.

Citing its ‘sharp looks, improved driving dynamics, greater efficiency’, and in particular applauding the ‘stunning’ Virtual Cockpit, the judges added:  “The A4 has what it takes to edge ahead of its incredibly talented rivals. In this competitive segment, praise doesn’t come any higher.

“Any car good enough to beat such talented opponents would always be in the running for the overall win, but the A4’s success was ensured by its strong residuals and appealing lease deals.”

The new A4 continues a legacy that can be traced back as far as the Audi 80, which laid the groundwork for the brand’s reputation for exceptional quality and solidity, as well as its rise to prominence in the UK premium segment.

Since then, consistent technological breakthroughs and advances in refinement have characterised the Audi best-seller. This all-new model is the greatest example of Vorsprung durch Technik yet, underscored by a vast array of driver assistance and safety systems, intelligent construction methods and infotainment options that are benchmark in the class.

Katie Purcell, Audi UK Product Manager for A4, commented: “To put it simply, everything about the A4 is new except the name, so it is enormously gratifying to see the exceptional effort a ground-up redesign like this entails being acknowledged by important awards like these. The fact that our wins are also based on the strength of the A4’s accessibility from a financial perspective makes them all the more valued.”

Available to order now with a combination of TFSI and TDI engines that break new ground in terms of sophistication, performance and running costs, the latest A4 saloon can also be specified with a raft of innovative options, from Matrix LED headlights to Audi traffic jam assist and a Bang & Olufsen 3D sound system, making this the most technologically advanced Audi saloon to date. Prices start from £25,900 OTR for the 150PS 1.4 TFSI six-speed manual, rising to £40,350 OTR for the 272PS V6 TDI Avant with quattro and eight-speed tiptronic transmission.