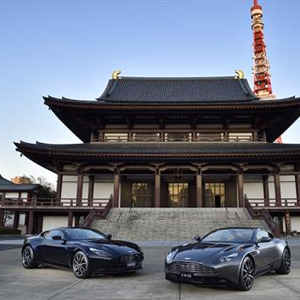 Aston Martin Lagonda, the producer of luxury hand-crafted sports cars, will drive trade and investment between the United Kingdom and Japan worth up to £500 million over the next five years of its Second Century business plan.

The investment program was announced by Dr Andy Palmer, Aston Martin President and Chief Executive Officer, during his visit to Japan as part of the UK delegation accompanying British Prime Minister Theresa May.

The trade and investment created by the company signals the importance of the Japanese luxury car market to the global success of Aston Martin. Included in the announcement:

•  Aston Martin exports from the UK (Gaydon and St Athan plants) worth over £400 million, boosted by new sports cars and the introduction of the company’s first Sports Utility Vehicle.

•  Aston Martin buying more than £70 million in components from Japanese suppliers including Bridgestone, Denso, Mitsubishi and Yazaki.The creation of an Aston Martin Meta Technology and Luxury Accelerator office in Japan, to open in 2018.

The Prime Minister said: “As we prepare to leave the European Union, it is vital that we build on our existing ties with friends and allies.

“Aston Martin is a prime example of the innovative and world leading firms the UK is proud of and I’m delighted they are joining me on this important trade mission.

“As the world’s second largest luxury car market, Japan is key to our future plans as we completely revitalise and expand our product portfolio under our Second Century plan. We have long enjoyed a loyal following from Japanese customers and the public alike, with our new dealership in Tokyo set to become our largest worldwide by volume.

“To ensure we are focused on the needs of Japanese and Asian customers, we are creating a Meta Technology and Luxury Accelerator office in Tokyo, reporting directly to HQ, to develop insights into luxury customer behaviour in Asia. This advanced product planning office is being created specifically to tap into research and technologies in the electric and connected car areas as well as the innovations Japan is making in the luxury market.” continued Palmer.

Between now and the conclusion of the Second Century plan in 2022, Aston Martin sales will more than double, making Japan one of the companies top five global markets by volume. Aston Martin currently exports a range of four sports cars to Japan including the new DB11 model. In late 2019, the company will introduce a sports utility vehicle built at the company’s second manufacturing facility at St Athan in Wales. More than 80% of Aston Martin production is exported, a figure set to increase as it grows sales overseas, particularly in the United States and Asia.