O’Neill look to rule the waves with Mercedes-Benz 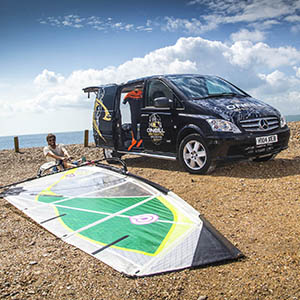 Adds Vito Sport to their fleet

The team at O’Neill Wetsuits already run nine Vito models, but that hasn’t stopped them adding three Vito Sport 116 CDI Dualiners to the mix – giving the full fleet a makeover in their striking livery in the process.

“We’re the market leader in our own field, and the same is true of Mercedes-Benz,” declares Product Manager Joe Turnbull. “With all it says about quality, style and safety, the three-pointed star complements our own brand image in a way that no other van manufacturer’s badge could do […] Factor in the Vito’s economy, reliability, long service intervals and three-year, unlimited mileage manufacturer’s warranty, and you have a vehicle that appeals as much to the head as it does to the heart – it’s an unbeatable combination.”

O’Neill Wetsuits operate from their European headquarters in Midhurst, West Sussex, and enjoy a long-standing relationship with Mercedes-Benz south coast dealer Pentagon Commercials. The fleet will be distributed between the company’s sales reps, marketeers, dive range and team managers, and to Joe Turnbull himself.

“The Vito Sport looks great and is very comfortable and well equipped,” he says. “It’s also a lot of fun to drive, more like a high-end car than a van. We’re not delivery drivers but sometimes carry samples, shop fixtures and the like, as well as colleagues when we attend events.

“Most of the time, however, these vehicles are chock-full of our own sports equipment. You have to be an enthusiast to work in this business – that’s why my Vito is always fully loaded with kite surfing and bike gear.”