The UK new car market declined -4.4% in September, according to figures published today by the Society of Motor Manufacturers and Traders (SMMT). The sector recorded 328,041 new registrations in the month – the weakest September since the introduction of the dual number plate system in 1999 and some -15.8% lower than the 10-year average of around 390,000 units for the month. 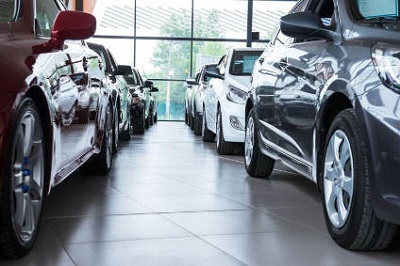 Private registrations fell by -1.1% over the month. Demand from business was also muted, with around 10,000 fewer cars joining larger fleets, representing a -5.8% decline.

More encouragingly, battery electric and plug-in hybrid car uptake grew substantially to account for more than one in 10 registrations as new models continue to increase consumer choice. Demand for battery electric vehicles (BEVs) increased by 184.3% compared with September last year, with the month accounting for a third of all 2020’s BEV registrations. Even with this growth, however, meeting accelerated ambitions for uptake of these vehicles will require government to get behind a truly world-class package of incentives – alongside binding targets on infrastructure to reassure consumers that recharging will be as easy as re-filling.

The relaxation of COVID lockdown restrictions from June saw consumers return to showrooms and factories restart production lines, after one of the bleakest periods in the sector’s history. The market still faces continued pressure, however, with myriad challenges over the next quarter. Brexit uncertainty and the threat of tariffs still concerns the industry, while the shift towards zero emission-capable vehicles is demanding huge investment from the sector, and stalling fleet renewal across all technologies is hampering efforts to meet climate change and air quality targets now.

Additionally, consumer and business confidence is threatened by the forthcoming end of the Government’s furlough scheme, an expected rise in unemployment and continuing restrictions on society as a result of the pandemic. With little realistic prospect of recovering the 615,000 registrations lost so far in 2020, the sector now expects an overall -30.6% market decline by the end of the year, equivalent to some £21.2 billion2 in lost sales.

Mike Hawes, SMMT Chief Executive, said, “During a torrid year, the automotive industry has demonstrated incredible resilience, but this is not a recovery. Despite the boost of a new registration plate, new model introductions and attractive offers, this is still the poorest September since the two-plate system was introduced in 1999. Unless the pandemic is controlled and economy-wide consumer and business confidence rebuilt, the short-term future looks very challenging indeed.”

Ashley Barnett, Head of Consultancy at Lex Autolease, said: “This year’s been full of unexpected surprises and today’s figures are no exception, bucking the trend of a spike in September registrations in line with the introduction of new number plates. It’s still too soon to tell if these are early indicators of a long-term impact of the pandemic.

“That being said, the ongoing rise in EVs is heartening. Upfront barriers including vehicle choice and range anxiety along with an improving infrastructure are all contributing to the transition. If anything, home working and shorter commutes are likely to increase appetite for alternatively-fuelled vehicles even more. However, we shouldn’t take our eye off the ball – we’ve still got a long way to go with the total number of EVs on the UK’s roads still only accounting for 0.45% of vehicles.

“Now, all eyes will be on the outcome of the government’s proposal to bring forward the ban on the sale of new petrol and diesel vehicles from 2040 to 2030 to further accelerate EV adoption levels. If we’re to keep up momentum, continued fiscal support and on-road perks are needed to increase the rate of adoption in line with the Road to Zero targets.”

Head of OEM at carwow, Sepi Arani comments: “September plate change brings a few surprises along with some continued trends for sales on carwow. Most notably perhaps, is the continued and dramatic demise of diesel sales, with a 52% year-on-year fall in sales in September. Intrinsically linked, we see a steady and continued rise in the sale of AVFs.

“Fully electric vehicles (EVs) that rely on no other source of power are up 20%, whilst ‘mild’ traditional hybrids are up 24%.  The real growth area, however, is the significant surge in petrol plug-in sales, up a staggering 140% year-on-year. Whilst it is of little surprise that market share for AFVs is increasing, it’s clear that the mass market driver is dictating the shift with petrol plug-ins the halfway house.

“Engines and drivetrains aside, Volvo’s XC40 tops the list as the most commonly sold vehicle on carwow in September, beating the Volkswagen Polo and the Mercedes A-class who also claim top spots.  The success of the Volvo XC40 is undoubtedly driven by it being an excellent SUV with a wide range of drivetrains, including the very popular hybrid. However, Volvo’s continued partnership with carwow, which now sees the majority of Volvo retailers live on our platform, is resulting in the highest rate of customer enquiry conversions to sales that we’ve ever seen.

“Interestingly, the Ford Puma enters our top sellers list for the first time, coming in at a respectable 6th position. This is an incredible feat and it is the only ‘new’ model to enter the carwow list.”

Michael Woodward, UK automotive lead at Deloitte, said: “In one of the most important months of the automotive calendar, new sales fell year-on-year by 4% in September. Demand from private buyers was relatively flat (-1%) but a decline in the fleet sector (-6%) had a major impact on overall performance.

“An easing of volume targets has led to dealers pre-registering fewer vehicles than we might see in a normal September. While sales typically attributed to pre-registration activity may filter through to the final quarter, the wider knock-on effect on residuals and the used car market remains to be seen. Dealers see pre-registered cars as a way of bolstering used car stocks, and a lack of activity in this space may drive prices up.

“The reduction in pre-registrations is good for OEMs and leasing companies. It keeps new car prices high and hence the residual price of the used car when it comes back. This anticipated strengthening of residuals could allow leasing companies to reduce monthly lease costs or improve their profitability.

“Dealers have commented about a shortage of ‘the right cars’ being available as OEMs have been conservative in their ramp up of production. Hopefully this will be resolved in following months.

“A decline in September sales adds to the growing pressure in the industry. Lost sales during the most restrictive COVID-19 lockdown measures means that year-to-date figures are down by 33% and look unlikely to recover.

“With many UK automotive jobs already affected by the current pandemic, the industry continues to remain live to the economic impact of COVID-19 and ongoing uncertainty around Brexit. The efforts of the SMMT to create a safe-harbour scheme will be seen by many as a lifeline at this time, allowing multiple companies to come together and support critical suppliers without falling foul of anti-competition rules. The UK has a proud automotive manufacturing heritage, and we are pleased to be able to do our bit by acting as a partner on this scheme.

Another bumper month for electric vehicles

“September was another excellent month for electric vehicles, with Battery Electric (BEV) and Plug in Hybrid (PHEV) growing their market share to 11%, compared to just 4% last year. Both BEVs  and PHEVs saw growth this month, of 184% and 139% respectively, accelerating an imminent overtake of diesel sales (-38%).

“This is driven not only by environmental credentials of EVs, but also an abundance of new models entering the market alongside financially attractive tax changes.

“With EV sales revving up, the pressure is now on the UK’s charging infrastructure to keep up, with capacity being tested at peak times. Maintaining coordination with charging infrastructure planning is needed for sustained growth. We need to see a joined up approach that considers how many chargers are needed, what kind of chargers are needed and what the underlying power networks look like.” 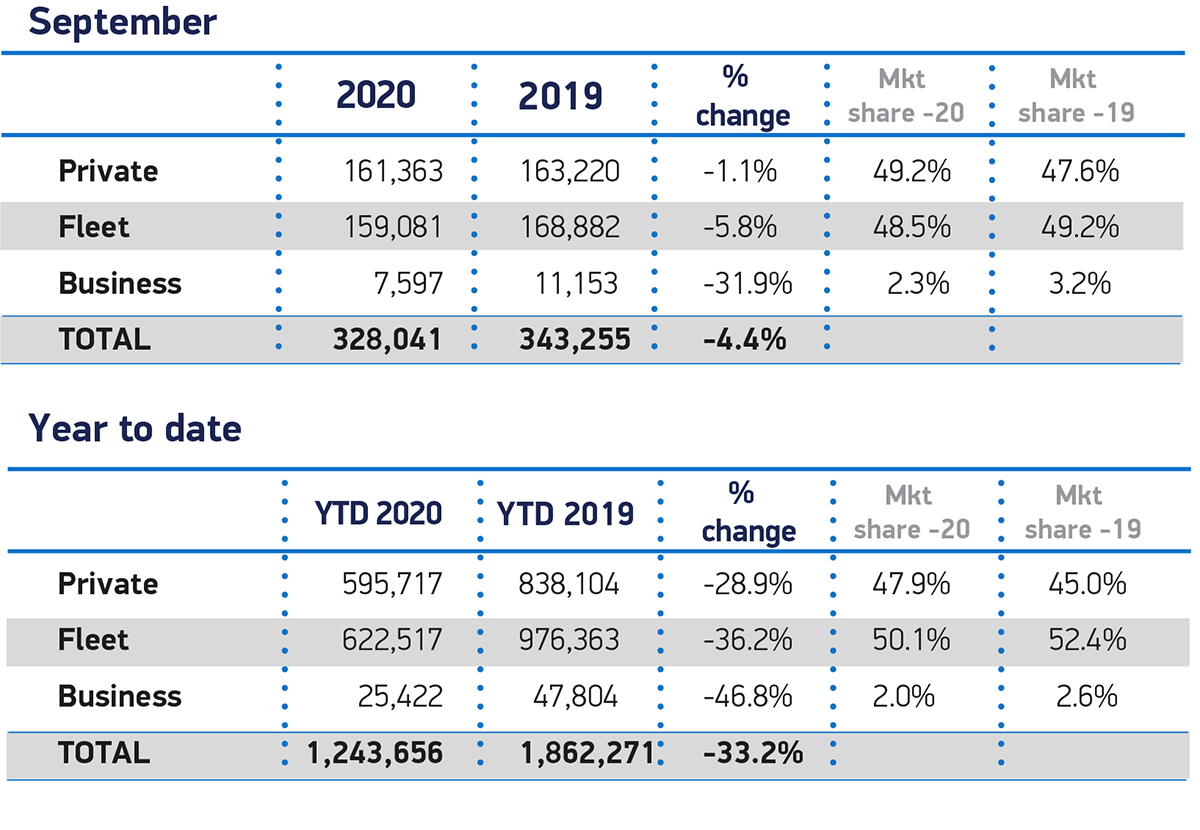 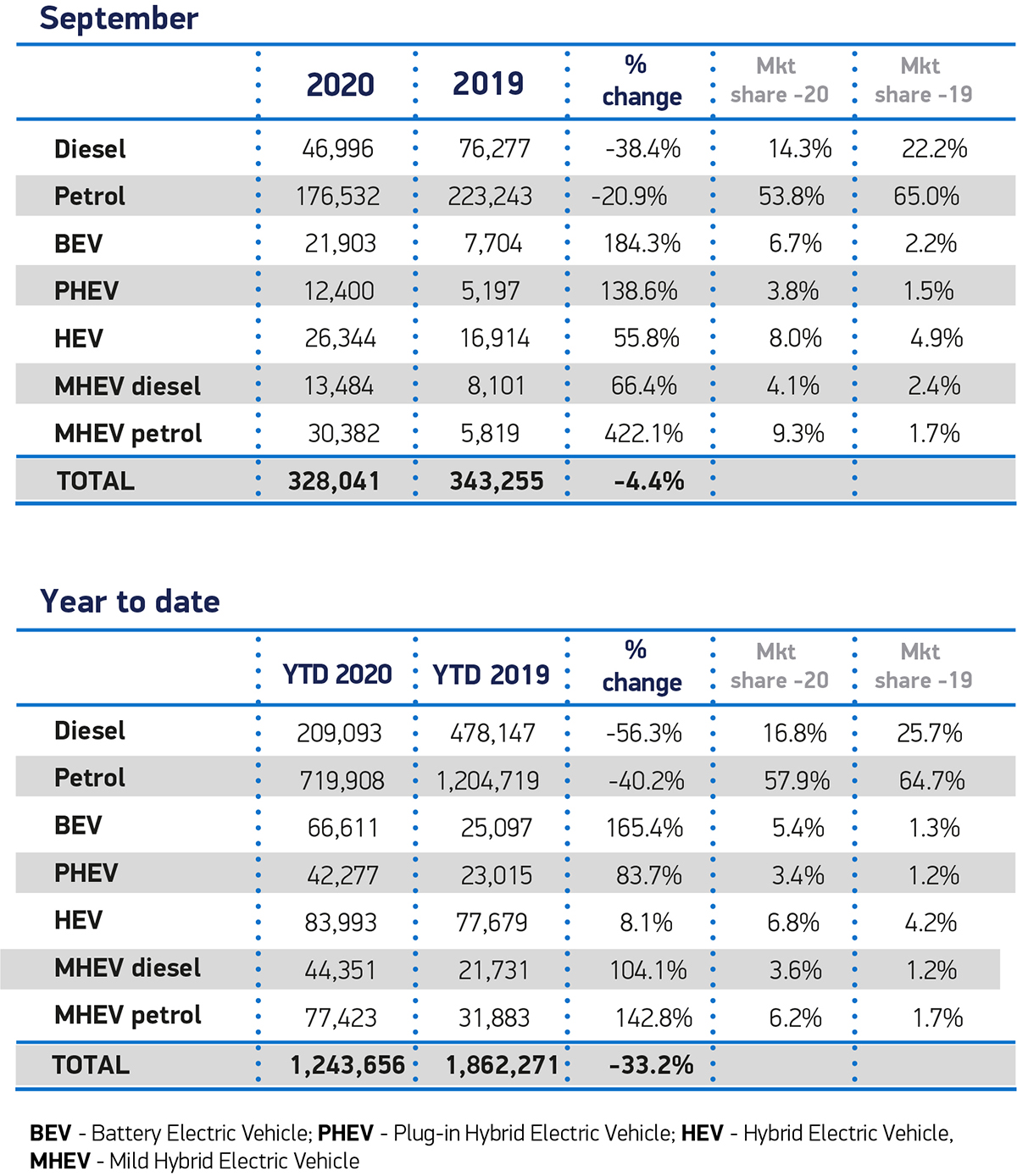