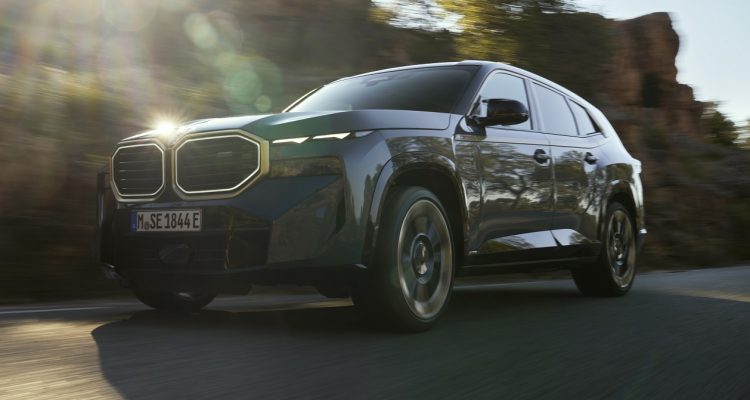 The M HYBRID system in the BMW XM consists of a new V8 engine with M TwinPower Turbo technology and an electric motor integrated into the eight-speed M Steptronic transmission. Power is channelled to the road via the M xDrive all-wheel-drive system. This combination produces immense power throughout the rev range, resulting in exhilarating performance, as well as a pure-electric driving range of 51 – 55 miles*.

Searing performance is complemented by a bold and visually striking exterior design, a luxurious interior that showcases the ‘M Lounge’ concept, plus the very latest technology and connectivity advancements from BMW.

In 2023, an even more powerful variant will be added to the BMW XM line-up, in the guise of the 748hp BMW XM LABEL RED.

The BMW XM shares its drive concept with the newly developed endurance racing car from BMW M Motorsport. The BMW M Hybrid V8 will go racing in the IMSA WeatherTech SportsCar Championship in North America in 2023, and will power BMW M Motorsport’s return to the FIA World Endurance Championship (WEC) and the 24 Hours of Le Mans in 2024.

Production of the BMW XM will begin at BMW Group Plant Spartanburg in South Carolina, USA in December 2022, with the worldwide market launch getting underway in spring 2023. Prices in the UK start from £144,980. 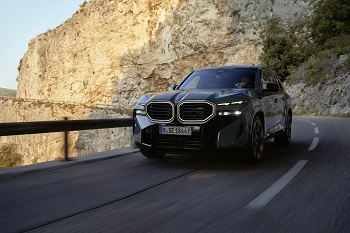 The new V8 engine stands out with its appetite for revs and relentless power across a wide engine speed band. The 650Nm of peak torque generated by the combustion engine alone is on tap from 1,600-5,000rpm, with maximum output of 489hp at 5,400rpm, making it the largest contributor to the total output of 653hp and 800Nm of torque. The drive system can hit a maximum 7,200rpm.

Power delivery is accompanied by distinctive acoustics governed by two electronically controlled flaps in the sports exhaust system; the engaging sound is also channelled into the cabin via the audio system.

Unique mounts connect the drive system with the front axle and the body, preventing vibrations from making their way into the interior.

Electric motor delivers instantaneous power delivery
The V8 engine in the BMW XM is supported by a permanently excited synchronous motor integrated into the eight-speed M Steptronic transmission. The electric motor contributes up to 197hp to the maximum output of 653hp, while its 280Nm combines with the combustion engine’s 650Nm to achieve a combined 800Nm. A pre-gearing stage is used to increase the electric motor’s torque to 450Nm at the transmission input, enabling the electric motor to generate propulsive power that could normally only be achieved using a far larger unit. As a result, the BMW XM accelerates from 0 to 62mph in 4.3 seconds* and from rest to 124mph in 14.3 seconds*. Top speed is electronically limited to 155mph, rising to 168mph if the optional M Driver’s Package is specified.

As well as providing an electric boost under acceleration, the electric motor performs a supporting role under steady loads, helping to increase the efficiency of the engine. This gives the BMW XM average fuel consumption of up to 188.3mpg in the WLTP test cycle, combined electric power consumption of 28.9kWh per 62 miles* and CO2 emissions as low as 33g/km.*

The BMW XM’s electric motor allows it to cover 51 – 55 miles* (WLTP) in near-silence and with zero local emissions. The top speed in pure-electric mode is 87mph.

BMW XM LABEL RED: ultimate performance with up to 1,000Nm
BMW M GmbH will launch the most powerful road-legal series-produced car in its history in autumn 2023. The M HYBRID drive system in the BMW XM LABEL RED elevates output to a new high of 748hp* with maximum torque of 1,000Nm*. The BMW XM LABEL RED is powered by a 585hp* version of the new high-revving V8 engine with M TwinPower Turbo technology. Peak torque rises to 750Nm*, sustained all the way from 1,800 to 5,400rpm*. Maximum output is generated at 5,800rpm*. The drive system in the BMW XM LABEL RED impresses with its ability to serve up large reserves of power in an instant, at any time, across a wide rpm band, and into the higher reaches of the rev range.

Fifth-generation BMW eDrive technology
The interplay between the combustion engine and electric motor is controlled by the M HYBRID system’s power electronics. For example, intelligent energy management allows the battery charge level to be regulated so that the final stretch of a long journey can be covered using only electric power.

Its low installation height allows the lithium-ion battery to be mounted in the underbody of the BMW XM. It provides a constant flow of power across a wide temperature range and even under the heavy demands of sporty driving. It offers a usable energy content of 25.7kWh. 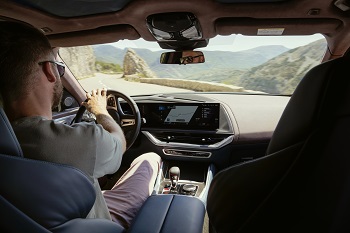 The charging socket on the BMW XM has a sensor that measures the temperature at the plug contacts to detect possible overheating at an early stage, and includes a handy light so that customers can easily hook up their car in the dark. A stylish storage bag for the charging cable is made exclusively for the BMW XM and secured in the boot area using a crash-protective carabiner-belt combination.

Eight-speed M Steptronic transmission with Drivelogic and integrated hybrid module
The new eight-speed M Steptronic transmission with Drivelogic channels not only the power generated by the combustion engine but also the drive torque from the integrated electric motor. The hybrid module additionally acts as an integrated drive-off element and allows the car to move at walking pace without the driver pressing the accelerator and bringing the combustion engine into play.

A wet multi-plate separation clutch manages the smooth engagement and disengagement of the combustion engine. Its low drag torque allows the clutch to be open when driving in pure-electric mode. The separation clutch can take torsional vibrations generated by the combustion engine out of the equation using micro-slip control. In combination with the integrated torsional vibration damper system, this helps to ensure high levels of acoustic comfort at low revs, in particular.

The eight-speed M Steptronic transmission also has a Launch Control function to enable traction-optimised acceleration off the line. The engine control unit governs both the Launch Control’s release logic and the slip-optimised limitation of drive torque.

Three driving modes for maximum performance and unbeatable efficiency
The interplay between the combustion engine and electric motor in the BMW XM can be adjusted using the M HYBRID button on the control panel in the centre console. HYBRID is the default setting and delivers the full output of combustion engine and electric motor in tandem. The contribution of each depends on the configuration selected from the M Setup menu. In COMFORT, the electric motor is used to the full. If the battery is low, the generator function uses the engine to feed additional power into the battery, extending the opportunities for pure-electric driving. In Sport and Sport Plus modes, the combustion engine is permanently active. In ELECTRIC mode, the BMW XM uses only the electric drive system and is capable of a locally emission-free 87mph top speed. The combustion engine is only activated under kickdown or in the transmission’s manual mode. The eCONTROL mode offers the option to maintain the charge of the battery or to increase it by means of energy recuperation, saving battery capacity for pure-electric driving in urban areas, for example.

One engine, one electric motor, four driven wheels: the M xDrive system
The BMW XM’s all-wheel-drive system splits the powertrain’s output between all four wheels as required. An electronically controlled multi-plate clutch ensures fully variable distribution of power between the front and rear axle. The system’s default mode is 4WD, but two other modes can also be selected via the M Setup menu. In 4WD Sport mode, the proportion of drive sent to the rear wheels is increased to deliver sporty handling.

*All figures relating to performance, fuel and electricity consumption and emissions are provisional. All the stated technical data, fuel consumption and emissions figures relate to the offering in the German market. Dimensions and measurements refer to vehicles with basic configuration in Germany. These may vary depending on the wheel/tyre size and items of optional equipment selected.
**Electronically limited.