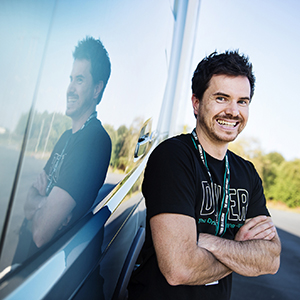 By small means, truck drivers can make a big difference to fuel consumption and save money for their haulage company – a fact demonstrated by Christian Scheiflinger from Austria who, thanks to a well-planned driving, took victory in the world finals in Volvo Trucks Global Drivers Fuel Challenge 2014, held last Friday (19th) in Gothenburg, Sweden.

“All the 23 finalists possess great skills. You have to adapt to traffic and know how to use the enormous power of a fully-loaded truck in motion. The difference is that a knowledgeable driver knows how they should use their truck’s weight to their advantage,” says Andrew Low, Driver Development Manager at Volvo Trucks and the man responsible for The Drivers Fuel Challenge competition track.

For an average-sized haulage company, fuel costs account for just over one-third of spending. Volvo Trucks own figures show that a fuel-efficient driver can save up to 10% in reduced fuel consumption, which in the long run means big savings for a trucking company that could ultimately reduce carbon emissions in the EU by up to 20 million tonnes per year.

For Christian Scheiflinger from Austria, who won the title ‘World’s most fuel efficient driver’ in Volvo Trucks Global Drivers Fuel Challenge, fuel-efficient driving has almost become something of a sport: “It’s very important to know the system; you have to know how the vehicle reacts on your input. If you have the full understanding of the vehicle, what it’s doing and how it reacts, you can improve your driving and improve the fuel efficiency.”

The Global Drivers’ Fuel Challenge Final is one of many ways in which Volvo Trucks is highlighting just how much difference the driver can actually make.

Runner-up was Tomi Roimola from Finland with Aare Müil from Estonia taking third place. British interest rested with Tommy Walton who drives for Containerships UK (Ltd) out of Teesport, who won the UK final, but unfortunately finished the day just outside the top ten.

“It’s about creating an awareness of how much difference each individual driver can actually make. The Global Drivers’ Fuel Challenge is one way for us to contribute to this. Fuel-efficient driving is something that all drivers can learn, but it takes time and hard work every day,” says Arne Knaben, Managing Director for Volvo Trucks in the UK & Ireland.

Nevertheless, as Arne Knaben continues, “Despite recent stability in pricing levels, fuel costs remain a heavy burden for many haulage companies in the UK and Ireland. However, despite this as demonstrated in the Final, an improved driving style can result in considerable cost savings”