Largest Beetle Meeting In The World 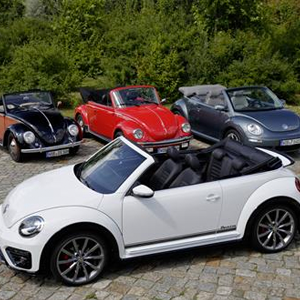 The countdown clock is ticking: from 18 to 20 August 2017, the world’s largest Beetle fan community is meeting on the beach of Travemünde (German Baltic Sea). This year marks the 13th Beetle Sunshine Tour.

And the number of participants continues to grow: 721 Beetles and original Beetles are currently registered. Gabriele Kraft, the creator and organiser of Beetle Sunshine Tour, chalks this up as a new record.

Highlights this year include the legendary “converging rally” – starting from different points – and the meeting of all vehicles, participants and visitors at the Brügmanngarten festival meadow in Travemünde.

A 560 PS Beetle GRC from the American GRC Rallycross series is also taking part. This, of course, is no coincidence. This year, the Beetle Sunshine Tour has the theme of “Welcome to America” in tribute to the successes of the original Beetle, New Beetle and Beetle in the USA.

And so you cannot help but wonder which Beetle will be crowned with a star-spangled banner as the finest of them all at this Baltic Sea meeting. The programme will begin next Friday from 6:00 pm at the Brügmanngarten festival meadow in Travemünde with food, drink and music.

Tourists, locals and fans alike are welcome to follow the colourful hustle and bustle on the Brügmanngarten festival meadow and enjoy the comprehensive programme with live music at the weekend. Celebrity fans such Karoline Schuch, Devid Striesow, Luna Schweiger and Sidney Hoffmann will also be mingling with the guests.

The Beetle has never lost its charisma. It has long been the most successful classic car in Germany. And festivals like the Beetle Sunshine Tour show that the New Beetle is anything but a run-of-the-mill used car.

The first versions are currently turning from lovers’ favourites to collectors’ items. And the current Beetle is already on this path. The cabriolets are proving highly popular.

It all began almost 70 years ago with the debut of the open-top original Beetle and legendary Hebmüller Cabriolet. From 1949 onwards, they dramatically democratised open-top driving.

The Beetle Cabriolet quickly became a world-wide export hit. A total of 331,847 units of this icon of the automobile world would eventually be built in all its versions. In 1980, the last Beetle Cabriolet – a red one – drove off the production line at Karmann in Osnabrück.

On 28 November 2012, the new Beetle Cabriolet made its world premiere in Los Angeles. In 2013, it arrived in the dealerships. In 2016, it was extensively updated. They will all be seen together in Travemünde, the open-top original Beetles, the New Beetle and Beetle, and of course their closed counterparts.

Their owners feel a common bond – no matter what the year of production or how much horsepower their car has. And that can be said for only a few cars in the world.