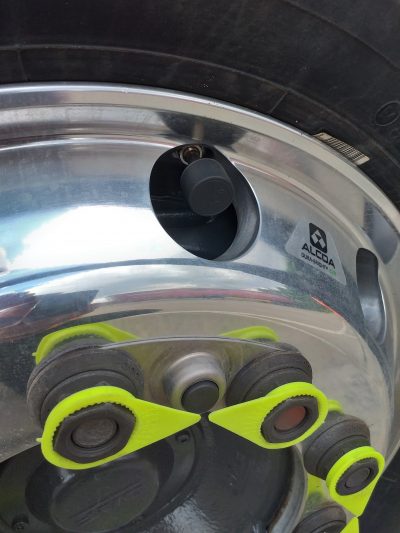 Hanson UK has become one of the first businesses in the country to protect its heavy truck fleet with the latest Michelin tyre and wheel safety technology.

The plan is to roll out the system – the brainchild of Midlands-based technology firm Wheely-Safe – across the remainder of its cement division’s 180-strong tractor fleet over the next few years.

“The added security the system provides complements both our approach to safety and to compliance in vehicle and driver standards. It’s an innovative way of working that effectively reduces the element of chance and makes life far more predictable.”

The Michelin Wheel Security and TPMS Heavy Fleet is the world’s first in-motion driver alert system which detects the onset of wheel loss before detachment.

Its straightforward set-up sees a sensor straddle two wheel nuts, thanks to a specially designed bracket. If a nut starts to loosen by just 1mm of movement, a signal is instantly transmitted to the solar-powered display unit in the cab, alerting the driver to pull over.

Due to its location next to the wheel rim and braking mechanism, the system’s onboard heat sensor can detect brake issues involving low or high temperatures. An inbuilt TPMS is also provided, comprising a set of robust sensors which replace the traditional valve caps and auto-pair with the display unit, that can be fixed onto the windscreen.

“Wheel security is important to any transport manager,” says Elliott. “You never want to be that business which gets a call to say a wheel has come off and there’s been an incident of any kind.

“So, to have this system that will warn a driver at the earliest possible opportunity is very important to us.”

Hanson committed to the order after being highly impressed with a demonstration of the technology at the end of 2018.

“Michelin is always a brand I have had respect for and the fact they have put their name on the product was a good indicator for me,” says Elliott.

“We immediately liked what we saw when we first viewed the product in action, it’s much better than any wheel security systems we have tried before and, overall, in terms of what it actually offers it will cost us less too.”

The new trucks will be used for hauling bulk powders, such as Hanson’s Cement, to concrete production facilities across the UK.