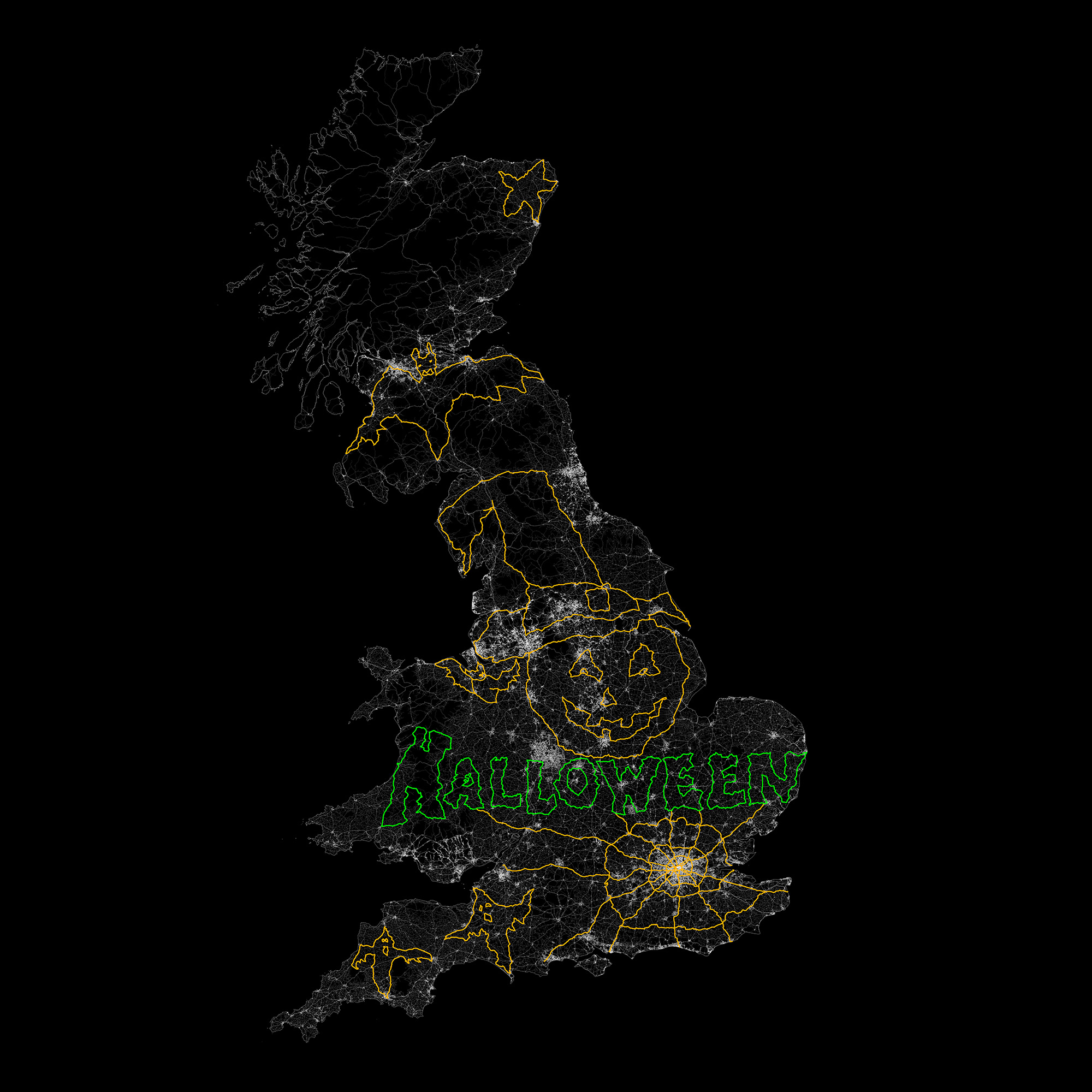 Did you ever realise that Loughborough hid the jagged tooth of a giant pumpkin? Or that London’s Paddington is the start of a 1,420-mile long spider’s web, its strands dissecting the M25? And who’d have thought that Wales housed the ‘H’ in ‘Halloween’, or that motorists on the A905 in Scotland had been driving over the ears of an evil bat for the last month?

Following on from our previous look at Vauxhall teaming up with GPS artist Jeremy Wood to create a 7,000-mile-long GPS picture all over UK, the company have revealed the fruits of their labour – a 6,080-mile-long image across the length and breadth of Britain, completed just in time for Halloween.

Adding credibility to the country-wide art, it was officially validated Guiness World Records as the World’s Largest GPS Drawing.

“There are Corsas in every village, town and city in Britain,” said Simon Hucknall, Vauxhall’s PR Manager. “So we thought it fitting that the new model should visit as many of them as possible to celebrate its arrival. Halloween-day coincided with the end of our press launch, and our GPS artist drove like a bat out of hell to produce an apt image of epic proportions.”

Over 264,000 positions were recorded with the Corsa’s GPS receiver and linked together like a virtual dot-to-dot drawing, using Great Britain as a giant canvas.

After starting out from Vauxhall’s HQ at Grifffin House in Luton, Jeremy drew the first mile of the image in Caereinion, Wales. Nearly 10,000 miles and 44 days later, he completed the drawing in Wallingford, England.

Averaging over 50mpg in the Corsa 1.0-litre ECOTEC, Jeremy drove in just over a month what an average motorist would cover in a year. Including the journeys used to link the images, the Corsa accrued 9,750 miles, averaged 221 miles each day, consumed 961 litres of petrol, achieved 45mpg and only had one incident when a pigeon collided with its door mirror. Jeremy also drove the entire distance barefoot, arguably another driving record!

A YouTube film celebrates the journey and result for added wow factor: