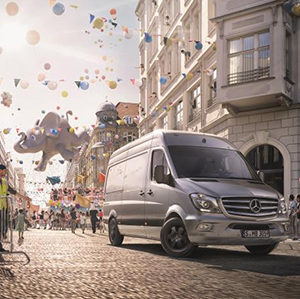 Mercedes-Benz Vans has launched a limited edition Sprinter for Retail customers to celebrate the 20th anniversary of the mighty vehicle, priced at £259* per month with a £2,800 deposit contribution.

The unique Sprinter 20th Anniversary edition will be available across a maximum of 1,200 vans, with special ‘Sprinter 20’ badging on the front wing and a unique option bundle added including: air conditioning, sat nav, a Driver’s Comfort seat with arm rest, wheel trims, and a chrome grille, worth over £2,000, for just £750.

Sprinter launched in 1995 and is a firm favourite in the large van sector, winning more than 70 UK-specific awards since it arrived in the UK.

These range from home delivery, such as Ocado, Sainsbury’s, Morrison’s and Iceland, to DPD, Yodel, DHL, and Parcelforce, as well as construction and plant companies, like HSS Hire and A-Plant, utilities businesses, including Cappagh and EEG, 100% of ambulance trusts across the country, ice-cream vans, and even a mobile deluxe beauty treatment room…

More than 250,000 of the Sprinter models sold have been panel vans, with 71,769 chassis cab variants. The Sprinter factory capacity in Düsseldorf is 745 units a day, equating to 214,560 produced vehicles a year.

In the first month of sales (April 1995), there were 56 Sprinter models sold. The top sales month since has been September 2013, with 4,217 sold, although this record is expected to be broken in September 2015…

Perhaps unsurprisingly, the most popular colour choice for Sprinter is white, with 199,794 vehicles sold since launch, followed by silver, with 14,313 vehicles in this colour.

The most miles on a Sprinter currently on the UK roads, and serviced via a Mercedes-Benz Commercial Vehicle Dealer, is 995,242 miles for a van registered in January 1999. A second Sprinter, with 964,436 miles on the clock, has run that up since November 2005.

Steve Bridge, Managing Director, Mercedes-Benz Vans, added: “Mercedes-Benz has been making Vans since 1896 and has pioneered new standards in safety every step of the way, with Sprinter leading from the front.

“From introducing ESP in 1995, offering the driver airbag as standard in 2000, launching Crosswind Assist in 2013, and most recently becoming the first manufacturer in the world to equip all new vans as standard with Rescue Assist QR code stickers, we have never sat still.”

For those Sprinter vehicles still on the road 20 years on, there is still another 10 years of free MobiloVan cover available, provided the last service was carried out by an authorised Mercedes-Benz Commercial Vehicle Dealer.

Every Mercedes-Benz Vans vehicle purchase comes with free 30-year cover across the UK and Europe, with an average response time of less than an hour, with more than 80% of vehicles fixed at the roadside.

MobiloVan will send out a roadside assistance van in the event of a breakdown, which is well-stocked with GenuineParts and manned by a Mercedes-Benz trained Technician, at no cost to the customer.

Also covered are minor non-warranty roadside repairs up to £130 including VAT, recovery to the nearest Mercedes-Benz workshop if roadside repairs are not possible, public transport costs to aid onward travel up to £55, vehicle return within 30 miles of the repairing Dealer, replacement vehicle for up to three working days, air or rail travel for onward journey up to £340 per person for driver and passengers, and overnight accommodation including breakfast for up to three working days for driver and passengers too.

Volvo Trucks continues to lead the deployment of zero-tailpipe