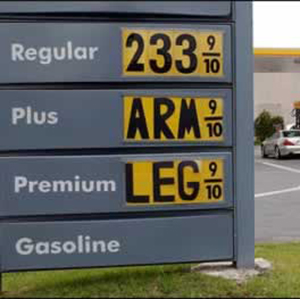 The government today (3 December 2014) announced it will press ahead with plans to introduce signs on motorways that display the price of fuel at service stations, to help promote competition and lower fuel prices.

The announcement was made as part of the Chancellor’s Autumn Statement. The Department for Transport will begin work early next year on trialling a new fuel comparison sign at five service stations on the M5 between Bristol and Exeter, with a view to introducing the signs by the end of 2015.

Transport Minister Robert Goodwill said: “For too long drivers have been ripped off by petrol prices on motorways. This government wants to support the hardworking people of Britain and build a fairer society. Today’s announcement will ensure people can see the cheapest places to fill up, encouraging greater competition between service stations.”

The trial follows a previous article on FleetPoint which called for more public information on UK petrol and diesel prices, with almost a third of drivers admitting they would come off the motorway and add another 10 miles to their journey to find cheaper fuel. The research found fuel sold at motorway stations was on average 7.5 pence per litre more expensive for petrol, and 8.3 pence per litre for diesel, than across the rest of the country.

The move was welcomed by the Institute of Advanced Motorists, with Neil Greig, IAM Director of Policy and Research, commenting: “We at the IAM greatly welcome this move, at last it will give motorway users the chance to compare prices and not feel ‘held to ransom’ at hefty premium prices charged on these routes.

“Using a motorway should not be seen as a penalty, and service station operators need to think long and hard about the charges they make. They should not see motorway users as a ‘cash cow.’”

Over the past 6 months the Department for Transport has been examining the cost and planning implications of introducing the signs. The aim of the trial will be to determine whether traffic signs are effective in providing information to road users, and successful in bringing down prices.

Five service stations on the Bristol to Exeter stretch of the M5 have agreed in principle to be involved in the trial.

Renault Trucks has unveiled the models of its heavy-duty