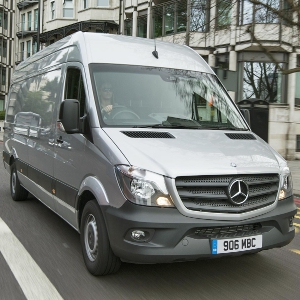 The Mercedes-Benz Sprinter enjoyed a night of stunning success at the prestigious Commercial Fleet Awards 2015, scooping three trophies including the most coveted accolade for manufacturers.

Some 550 of the fleet transport industry’s ‘great and good’ gathered at The International Centre, Telford, to see the Sprinter crowned Commercial Vehicle of the Year.

Stephen Briers, Commercial Fleet Editor-in-Chief, declared: “The Sprinter is an amazing fleet proposition and quite simply the standard by which all vans should be measured. It is unbeatable for flexibility, technology, safety, reliability, height/length options and breadth of range. On top of that, it provides an ideal platform for conversions.”

It is the second time in three years that the Sprinter has taken top honours – it was also named Fleet Van of the Year in 2013 (the Commercial Vehicle of the Year category was newly created for 2015, to reflect the fact that the awards now include trucks as well as vans).

The Commercial Fleet Van Awards are judged by a panel of industry experts. The Sprinter additionally took the prizes at last night’s (24th September) event for Large Panel Van of the Year – its seventh victory in eight years in this category – and Best Van Chassis Derivative. Meanwhile, its Mercedes-Benz Citan and New Vito stablemates were highly commended in the sections for Small Van and Medium Van respectively.

The Sprinter was launched in 1995 and Mercedes-Benz is this year celebrating its 20th anniversary. Firmly established as the fleet favourite of many of the biggest operators on Britain’s roads, the fuel-efficient 3.0-5.0-tonne gvw range is available in a wide range of sizes and specifications.

“What a night, and what a 20th birthday present!” recalled Mercedes-Benz Vans Managing Director Steve Bridge. “Two decades after the very first vehicle left the factory, and thanks to a continuous programme of product development, the Sprinter continues to lead the field. Once again we’ve left the competition trailing in our wake, and with its impressive capabilities and low costs of operation the Sprinter allows our customers to do likewise in their own market sectors.”

In making the Large Panel Van of the Year award, Commercial Fleet’s judges noted the increasing popularity of such vehicles as buyers shun larger alternatives requiring tachographs. Said Stephen Briers: “The Sprinter regains the title it has won for seven of the last eight years because of its outstanding durability, reliability, strong residual values and good payload capacity. It is also packed with safety technology and comes with the reassurance of a three-year, unlimited mileage warranty as well as the backing of the excellent Mercedes-Benz Dealer Network.”

In addition to its suitability as a base vehicle for modification for a range of specialist fleet uses, the manufacturer’s own conversion programmes and the part they play in helping to simplify and facilitate the process for operators were key to the Sprinter’s success in the Best Van Chassis Derivative category.  “Support from Mercedes-Benz is second to none,” added Stephen Briers. “The company wrote the rulebook on support services.”