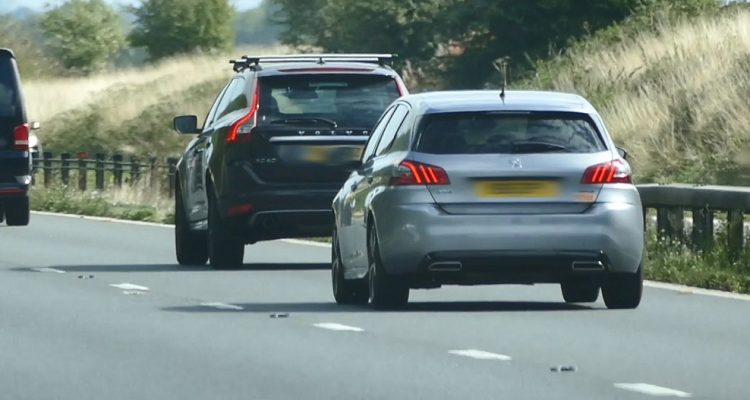 Drivers have been warned against the dangers of tailgating amid concerns that huge numbers of motorists are failing to follow basic safety rules on the country’s busiest roads.

Eight in 10 people questioned in a National Highways poll said they were aware of the ‘two-second rule’ when they took to the wheel. While three-quarters (75%) said they had never driven too close to the vehicle in front within the previous three months.

Yet a recent trial of new tailgating cameras on a stretch of the M1 captured 60,343 incidents of vehicles driving too close, in just one year.

National Highways has now launched a campaign to tackle the issue of tailgating which is a factor in around one in eight crashes on England’s motorways and major A roads.

National Highways Head of Road Safety, Jeremy Phillips, said: “Unfortunately, as highlighted by the M1 trial, we know that too many people are driving too close on our roads.

“Most tailgating is unintentional by drivers who don’t realise that they are infringing on someone else’s space. But not leaving enough space between you and the vehicle in front is not only very frightening for that driver, it could have devastating consequences.

“The closer you get, the less time you have to react and to stop safely. So to avoid inadvertently getting too close to the vehicle in front, we would urge drivers to use the two-second rule and to always ‘stay safe, stay back’.”

The Highway Code tells drivers to allow at least a two-second gap between you and the vehicle in front on roads carrying faster-moving traffic and in tunnels where visibility is reduced. The gap should be wider as speeds increase. It rises to 2.4 seconds – about 53 metres – when driving at 50mph and 3.1 seconds – or 96 metres – at 70mph.

Furthermore, the gap should be at least doubled on wet roads and increased still further on icy roads.

To use the rule, drivers should allow the vehicle in front to pass a fixed object such as a lamp post or road sign then count to two seconds. If they reach two second before reaching the reference marker they need to drop back.

The picture  below shows how intimidating it can be when someone is driving too close. Most drivers would realise this car is driving too close

But this second image gives the viewpoint of the second driver – and the close following isn’t quite as obvious. When asked, a large number of people seemed to think a gap of this size was acceptable. Would you consider this too close?

Around one third of respondents in the research for National Highways stated that leaving a gap of 1-2 car lengths was sufficient.

In both pictures the distance is 7.5m so at 50mph this gap is approximately 0.34 seconds compared with a gap of 53m or 2.4 seconds which should be left at this speed.

Last year National Highways and Northamptonshire Police joined forces in a trial to raise awareness and deter tailgating. Cameras were used on lane one of a stretch of the M1 over 12 months to automatically detect vehicles driving too close.

National Highways has now released the figures from the trial when there were:

Drivers caught in the trial were not prosecuted but advised they had been tailgating and given educational material demonstrating the dangers of driving too close.

National Highways will use the results of the trial to inform future work on tailgating.

Driving too close to another vehicle can lead to prosecution for ‘driving without due care and attention’. This offence carries a minimum fine of £100 and three penalty points, and in some cases more severe penalties or a court appearance.

Jason Wakeford, head of campaigns at Brake, the road safety charity, said: “It’s vital that drivers leave enough distance between the vehicle in front in order to react in time to any sudden dangers. We’d urge everyone to respect the two-second rule to keep them, and others on the road, safe.”

Institute of Vehicle Recovery continually look to improve the safety of its roadside workers and to improve training safety standards for the recovery industry. President Nick Ovenden said:

“We fully support National Highways ‘2 second rule’ campaign, which highlights the importance of keeping your distance whilst driving. These precautions along with the updated rule 264 of the Highway Code – drivers should move over, if safe to do so, when approaching people and vehicles stopped on the hard shoulder or in an emergency area to create more space for the people and stopped vehicles – can only make the road network safer for our roadside workers.”

National Highways has a dedicated webpage where drivers can find more information about tailgating and what they can do to stay safe.