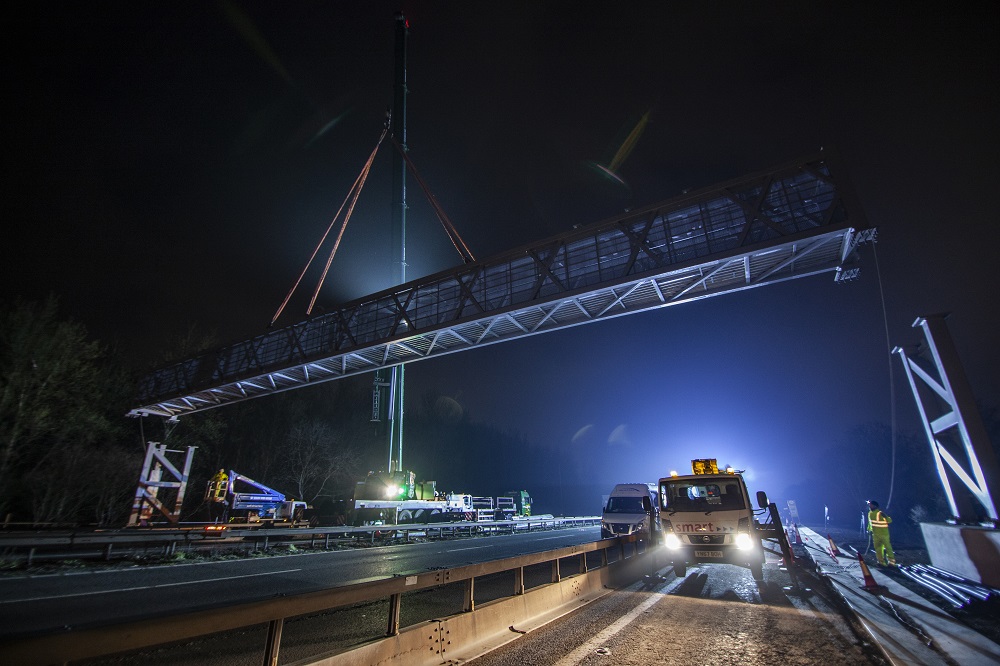 This is the moment a giant ‘superspan’ gantry was installed across a stretch of the M6 as part of a major upgrade to ease congestion.

The structure is nearly 131ft (40m) in length and weighs around 46 tonnes. It was lowered into place by a specialist crane weighing 200 tonnes.

The new gantry spans the width of the M6 and was installed at the weekend near Corley Services between junctions 3 (Coventry / Nuneaton) and 4 (Coleshill).

It will house the technology responsible for providing safety information to motorists as well as advising drivers of changes in variable speed limits to help traffic flow more smoothly.

Highways England captured timelapse footage of the painstaking work that took place overnight while the road was at its quietest.

Highways England Assistant Project Manager, David Croser-Drake, said: “We planned this work meticulously to ensure that we could get the M6 open on Sunday morning as quickly and as safely as possible.

“This is a really exciting milestone in this major upgrade of a busy stretch of the M6 and once completed will ease congestion and provide smoother journeys for those using it.”

Once finished, the new-look stretch of the M6 will feature:

Some 70 people worked on the installation on Saturday evening with the M6 open to traffic by 8am on Sunday (March 31) morning.

Elsewhere, Highways England has completed a £265 million project to add extra lanes and new technology to a 19-mile stretch of the motorway between Crewe and Knutsford – the most significant change since the M6 first opened in Cheshire in 1963.

A fourth lane has been introduced in each direction and a total of 258 electronic signs, 104 traffic sensors and 70 CCTV cameras will help tackle congestion and improve journey times for around 120,000 drivers every day.

The upgrade is the first of four smart motorway schemes to be finished that will increase the M6’s capacity by a third on 60 miles of the motorway between Coventry and Wigan.

And there’s also good news for motorists in North Tyneside with more than 80,000 drivers a day are experiencing safer and smoother journeys thanks to the opening of the North East’s first ever triple decker junction.

The £75 million Highways England Coast Road scheme has been opened on time and traffic is now able to use the new section of road. This means that drivers will no longer have to negotiate the roundabout and can continue straight on along the A19.