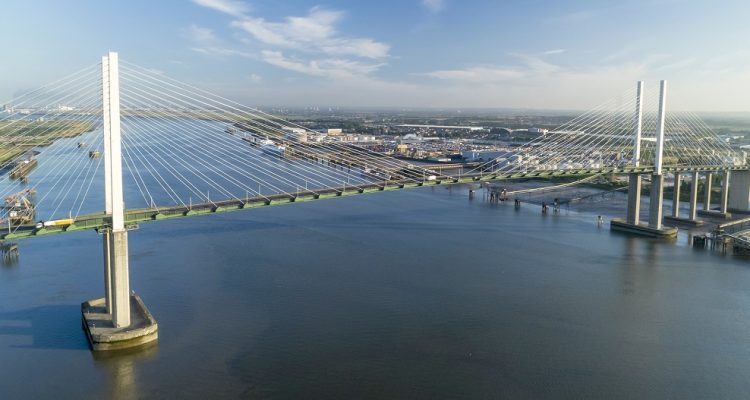 Built at a cost of £120m and officially opened by Her Majesty Queen Elizabeth II in October 1991 it was the first bridge to be built at an entirely new location along the river Thames for more than 50 years. For a short time it was also the longest single span bridge in Europe measuring over 2,872 metres long.

Nicola Bell, National Highways Operations Director (South East), said: “The Queen Elizabeth II bridge together with the whole Dartford Crossing has proved to be a vital link on the M25 and a great investment in the economy, helping nearly 1.5 billion vehicles cross the river Thames over the past 50 years.

“It continues to bring huge benefits to the economy and with these benefits comes demand. The government is committed to doing all they can to ease traffic flow and improve journeys for the future.”

When the M25 motorway was completed in 1986, the Dartford tunnels provided a vital link in the national road network. Very soon the daily average volume of traffic regularly exceeded the maximum designed capacity of 65,000 vehicles and forecasts predicted annual of more than 40 million vehicles.

As the operation of the Dartford Tunnel was controlled by an Act of Parliament, new legislation was necessary to allow transfer of the crossing from Kent and Essex County Councils to Dartford River Crossing Limited. This process was completed on July 31st, 1988 and construction of the bridge began just a few days later.

It took three years to build the new bridge and many challenges and obstacles had to be faced along the way, such as co-ordinating the work around changing water levels and the river traffic of a busy tidal waterway. Beneath the water¬line, the bridge rests on two reinforced concrete foundations, each of which is the equivalent in volume of 400 double-decker buses and weighing a total of 85,000 tonnes. These were constructed at a dry dock in Holland and towed across the North Sea by tugs on a 150-mile journey to the River Thames and sunk into position either side of the navigation channel. 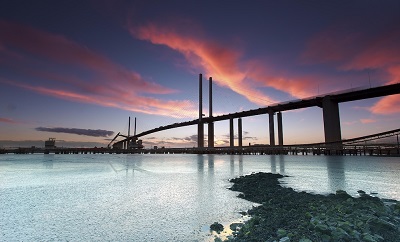 The Dartford Crossing has its own dedicated control room which monitors the traffic and has National Highways’ traffic officers, maintenance workers and vehicle recovery teams based on site to respond to incidents quickly.

Andy Dean, Chief Executive Connect Plus, said: “With over 150,000 vehicles making the crossing every day, it is vital that we keep the bridge and tunnels flowing smoothly.

“We understand the importance of this key link to the local and national economy, and we have a highly skilled team working around the clock to help keep the traffic moving.”

For almost 60 years the Dartford Crossing, both the bridge and two tunnels, have stood as the only crossing between Kent and Essex, a critical link carrying vital food, goods and services between the manufacturing centres, ports, and distribution hubs of the South East, Midlands and North of England.

Over the last two years the crucial role of the Dartford Crossing in keeping goods and people moving during and after the peak of the Covid-19 pandemic has also been revealed.

The figures show that despite the unprecedented restrictions put in place in England, the crossing regularly carried more traffic than it was designed for and now carries more food and goods than ever before.

Plans for a further crossing, the Lower Thames Crossing will improve journeys even further by almost doubling road capacity across the River Thames east of London.

If given the green light this reliable new route will help to unlock a wealth of long-term economic benefits, as well as play an important role in the country’s economic recovery by supporting over 22,000 jobs during construction, including hundreds of opportunities for apprentices, graduates, and local businesses.

Mark Bottomley, Lower Thames Crossing Programme Director, said: “The Dartford Crossing is a feat of engineering that has played a crucial role in almost every aspect of our daily lives, from delivering essential goods to our shelves and our doorsteps, to visiting friends and family or getting to work.

“The Lower Thames Crossing is its ambitious sibling: a new crossing that would almost double road capacity crossing the Thames east of London. It will not only add billions to the economy by creating a direct new connection, but also by improving the reliability of Dartford crossing, as well as improving air quality in the region, create jobs now and in the future, and new routes and spaces for the local community and wildlife.”