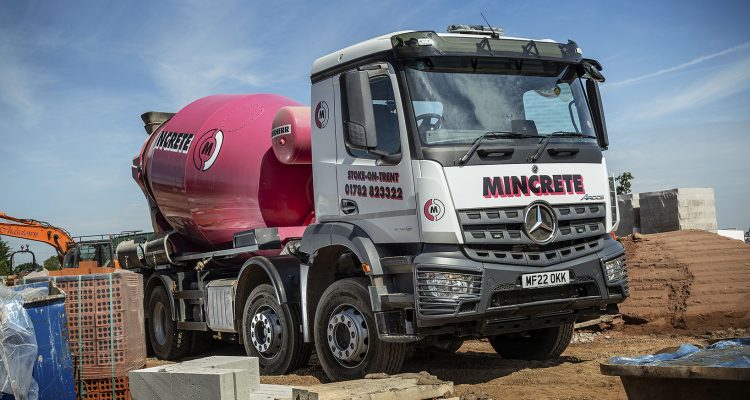 Increased demand for concrete arising from development of the HS2 high-speed rail link through Staffordshire and Cheshire prompted ready-mix specialist Mincrete to invest in another couple of Mercedes-Benz truck mixers.

The subject of Mercedes-Benz Finance contract hire agreements, the operator’s latest 8×4 Arocs are now being inspected and maintained at the Stoke-on-Trent branch of supplying Dealer eStar Truck & Van.

Mincrete was established in 1985 as a mini-mix business in Burslem, one of the six Potteries towns that form part of the city of Stoke. It opened a second plant, in Sandbach, in 2014, and another in Stafford a couple of years later. In addition to ready-mix concrete, the company provides floor screeds, bulk concrete and innovative low-carbon concrete.

Four years ago Mincrete was running a fleet in which Mercedes-Benz had long featured prominently, but that also included a number of vehicles by another manufacturer. Having been bought outright, all of these trucks were serviced by an independent provider. 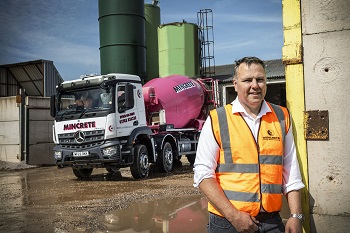 However, following his appointment in 2018 Transport Manager Paul Mullington initiated a comprehensive fleet review, as a result of which Mincrete adopted a new acquisition and maintenance model. “We concluded that it would be better, and more cost-effective, to go the contract maintenance route with a single manufacturer,” he explained.

The Arocs represented the backbone of the Mincrete fleet at the time, and even more so today. Purpose-designed for construction-related applications, this muscular chassis offers the rugged build quality and high ground clearance that make it ideally suited to operation on rough sites.

“The Arocs does the job admirably,” confirmed Mr Mullington. “The truck is reliable, fuel-efficient and popular with our drivers, who are familiar with and know how to get the best out of it, thanks not least to the training we give them. Against this backdrop, and given the relative proximity of its Dealer’s workshop, Mercedes-Benz was the obvious candidate with which to partner.”

So out, at the earliest opportunities, have gone any mixers that did not wear three-pointed stars, while Mercedes-Benz Trucks’ official representative in Stoke has delivered on commitments to keep its customer’s fleet on the road and earning.

Today, Mincrete operates 15 Mercedes-Benz trucks – most are eight-wheeled mixers, although the line-up includes six- and four-wheeled versions too, as well as an 18-tonne concrete pump. Its two remaining vehicles, and the only ones still based on chassis by another manufacturer, are both volumetric batch mixers.

Mincrete’s latest Arocs are its first to be supplied by eStar Truck & Van, the newest member of the Mercedes-Benz Trucks UK network, which won its franchise in September 2020 and also operates from sites in Deeside, Knowsley and Trafford Park.

“We also specified the same engine for the three 32-tonne mixers we acquired in 2019,” reported Paul Mullington. “I believe it is better suited to the hilly terrain in this area, and when driven correctly more economical than the 400 hp alternative.”

As with their predecessors, Mincrete’s latest mixers are fitted with distinctive, pink-painted 8m3 drums by Liebherr. eStar Truck & Van has also taken an order for another couple of identical vehicles, which are due for delivery next spring.

Mr Mullington continued: “Although our own focus is on housing developments, work on the stretch of HS2 from Birmingham to Crewe means there is a lot of demand for concrete mixers in this part of the country right now, so we’re extremely busy.”