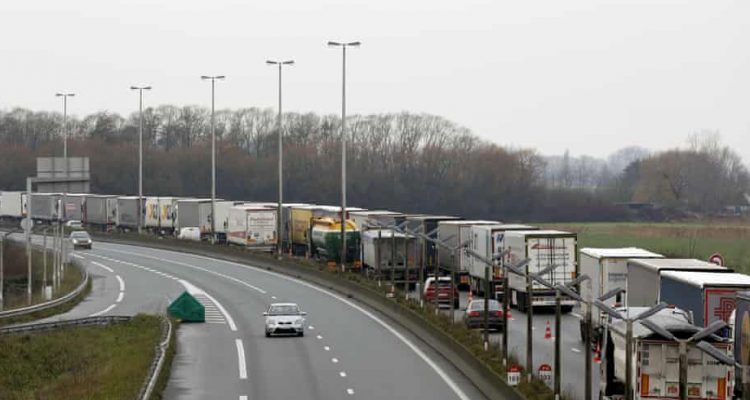 Lorries bringing goods into Britain from Europe are being held up at the border following the introduction of new customs regulations this month, with hauliers warning the situation is set to get worse as trade picks up after the January lull.

The new Brexit border regulations, which kicked in on 1 January this year, require goods coming into Great Britain from the EU to be subject to full customs controls.

All goods presented to customs and their export declarations must be entered into the HMRC Goods Vehicle Movement Service (GVMS) to establish if any further physical checks are required under the new rules.

Since the new rules came into force, truck drivers have been complaining about long delays at Calais with queues stretching to the A16 motorway outside the town, which they attribute to the new rules. 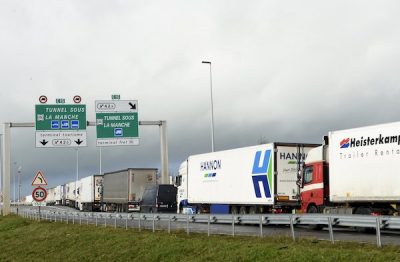 One tweeted: “If you are currently wondering why the quality of food is so poor right now…it’s probably sitting in the back of a truck along with me in Calais – outside the port trying to get in.”

Another reported that he had seen between 20% to 25% of trucks sent to the inland border park at Calais for extra checks because of incorrect paperwork. “This is a quiet period, and the queues are massive. So, I am expecting a lot of delays when things get busier in February,” he added.

Freight forwarder Jordon Freight said the problem was on both sides of the border. Last week one of its client’s accompanied trailers was held up for six days in Felixstowe, because of a fault in the paperwork, finally getting clearance last Friday (14 January).

Founder and director Jon Swallow said: “The problem is that the new rules require a lot of information to be co-ordinated between a number of parties, including the shipper, the haulier, the customs agent, the freight forwarder and the importer and all that information is complex and has to be correct.

Swallow said he struggled to contact HMRC for two days to get clearance for the trailer, with the lines constantly busy.

He added that HMRC’s Goods Vehicle Movement Service (GVMS) was also proving complicated, particularly for European importers who are unfamiliar with it.

“You need an HMRC Gateway pass to use it and it is an awful clunky system to use,” he added.

Swallow believes delays will get worse as trade picks up this month. “I think European hauliers will decide they no longer want to come here – that they won’t want to bother with the red tape and will find it a lot easier to just trade in Europe.”

He added: “This has everything to do with these new border controls and needing to have customs clearance of goods. We have been relying on just-in-time deliveries for years, but that just does not work now. For sure it will get worse. It is like going back to the eighties.”

Swallow believes the regulations will result in a fall of imports into the UK from Europe, as well as a further shift in routes away from Dover and a rise in modes such as unaccompanied trailers and containers.

“Last year when these regulations kicked in on the British side of the border traders extracted themselves from the market but as they were exporting from the UK no one on the High Street noticed but this year, as this builds up, we will notice, as European importers increasingly question whether it is worth all the trouble to import into Britain.”

Europa Worldwide chief Andrew Baxter commented that any delay to goods will not necessarily be visible at the ports and are likely to become more apparent later this month and into February.

He said: “These issues will actually happen away from the ports at groupage terminals and hubs and so won’t be that apparent at first.

“The real risk for the groupage operator is that problems with clearances will cause a build-up of volumes in their own terminals. Those problems are likely to begin to emerge by the end of January, beginning of February as customers’ deliveries are delayed.”

He added: “The key question is, how well prepared are you? The main complexity is the import declaration and the requirement to pay duty prior to the delivery of goods.

“We have been through a programme of very significant software development and implementation to prepare for this. It is a complex, major software launch and broadly speaking we are processing what we need to process.

“However, the potential to get the paperwork wrong is significant so I would be interested to know how others are coping without those complex software systems.”