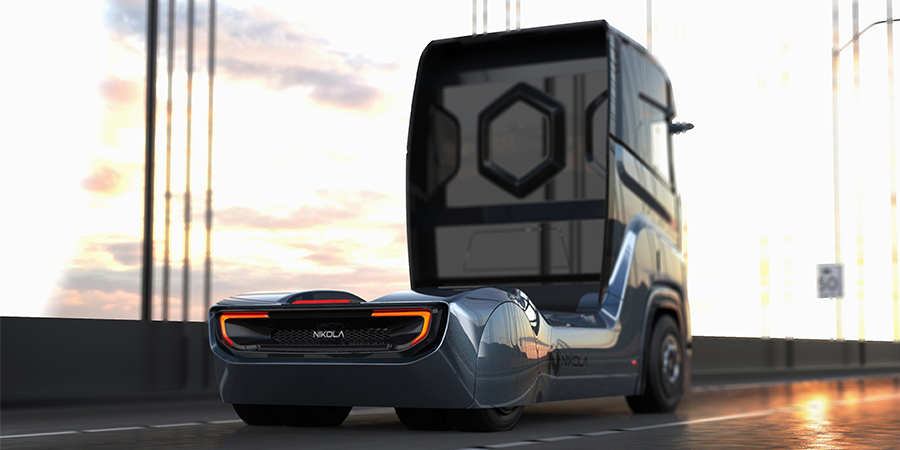 Fuel cell electric truck developer Nikola Motor Co. said it has developed a heavy truck for the European market and intends to begin production by 2023.

Along with the truck, designed to meet all European size, weight and safety requirements, Nikola will establish a European factory and begin an overseas expansion of its proprietary hydrogen-fueling network, said Trevor Milton, founder and chief executive of the Phoenix, Ariz.-based startup.

An initial prototype of the new truck, the Nikola TRE, will debut at the upcoming Nikola World product expo and corporate headquarters housewarming April 16-17 in Phoenix.

Timing of the announcement was a surprise. Nikola is in the midst of a major fund-raising drive, is completing its new headquarters and starting work on a manufacturing facility in Arizona and has two North American trucks to get into production.

The North American models are the Nikola One sleeper cab and Nikola Two day cab. The European model name, TRE, is Norwegian for “three.”

“They’ve got a lot on their plate, but maybe they did it now to get out ahead of Tesla,” Antti Lindstrom, an analyst with IHS Markit, told Trucks.com.

Tesla, which builds battery-electric cars, plans a Class 8 truck of its own. Its name is well-known in Europe, where its cars have a large following.

Nikola and Tesla likely see Europe as a major market for their trucks in light of a desire by many Western European governments to eliminate diesel as a transportation fuel. And the companies – or at least their top executives – see themselves as rivals.

Separately, Nikola has filed a patent infringement suit against Tesla over the Tesla Semi’s design.

Despite Musk’s dismissal of hydrogen fuel cell technology, it is seen by many in Europe as a viable low-emission, fuel-efficient replacement for diesel. Both Mercedes-Benz and BMW have long histories of developing and testing hydrogen-powered passenger cars, and South Korean automotive giant Hyundai recently announced a deal to send 1,000 fuel cell trucks to Switzerland by 2023.

Most western European nations already have hydrogen stations in operation; German is second in the world behind Japan in the number of them. H2Stations.org, which monitors hydrogen station activity worldwide, said Europe now boasts seamless hydrogen corridors from Norway to northern Italy and from western Switzerland to Vienna.

“If fuel cells are to become a viable alternative for heavy trucks, certainly the markets to look at first would be those … highly regulated in terms of emissions, such as Europe,” Dario Duse, a managing director for global consulting firm AlixPartners, told Trucks.com.

While Nikola is pushing ahead, Duse, who is based in Italy, cautioned that hydrogen production is expensive, and hydrogen infrastructure, especially for heavy trucks, is iffy in many markets.

“Taken all together, that means that moving too early into any market can be as risky as being late to that market,” he said. “It’s a delicate balance, and any company considering making the jump would be wise to do so with a lot of preparation and with its eyes wide open.”

Nikola, though, plans to build its own network. Offering its trucks for lease only, with free fuel at Nikola-owned stations, is a key part of the company’s business plan. European stations will start going up in 2022 and will “cover most of the European market by 2030,” Chief Executive Milton said.

The Nikola TRE, he said, will have all the components necessary to implement Level 5 autonomous driving when it is permitted in Europe. The truck can be built with powertrains ranging from 500 to 1,000 horsepower, 6×2 or 6×4 wheel configuration, and fuel tanks sufficient for 300 to 750 miles (500-1,200 kilometers) of range.

Testing is scheduled to begin in Norway “around 2020,” Milton said.