Wins for Kia Niro and Sorento 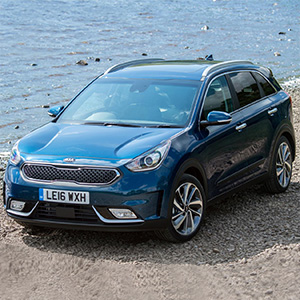 Five models from the Kia range were recognised in the 2018 Driver Power Survey awards, as voted for by owners of the cars. Both the Niro and Sorento won the top prize in their respective categories. In the list of best Cars to own in 2018, the Kia Niro took second place scoring just over 93 per cent, while six other Kia models featured in the top 75.

The Niro was voted the best Small SUV by its owners and was also awarded first place in the Infotainment, Connectivity and Electrics category as it comes with a reversing camera system, Apple CarPlay™ and Android Auto™ as standard. The Niro’s safety features, which include Autonomous Emergency Braking and Lane Keep Assist System, were commended and came in second.

The Sorento proved popular with its owners, winning the Large SUV category whilst also winning the Practicality and Boot Space category with a boot capacity of 605 litres with five seats in position or a generous 1,662 litres when all seats are folded. Owners also praised the Sorento’s Reliability and Build Quality finishing second in the category.

Other awards included second place for the Rio in the Supermini category. The Sportage was awarded third place in the Mid-size SUV category, with the Picanto coming in third in the City Car category.