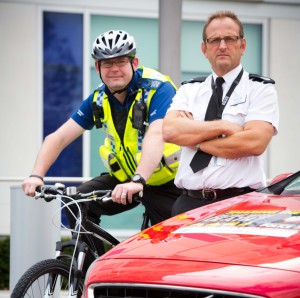 GMP have loaned a Volvo V40 fitted with the award-winning Cyclist Detection system for three months, to be commandeered by Police Community Support Officers in their road safety drive.

Liveried with magnetic signs, the high-visibility vehicle is designed to reduce the number of cyclists involved in collisions and encourage cyclists and drivers to safely share the road.

Selwyn Cooper, National Corporate Operations Manager at Volvo Car UK, said: “We’re delighted to be working alongside such a prestigious organisation like the GMP and supporting the public services.

“It’s great that fleets are beginning to realise the importance of safety technology, and we’re delighted that our award-winning Cyclist Detection system is now protecting road users across the city and raising public awareness about cyclist safety.

“The technology is an integral part of our Vision 2020 that nobody will be killed or seriously injured in a new Volvo by 2020.”

As part of the loan, officers will also be educating cyclists on Volvo’s Cyclist Detection system.

The advanced Cyclist Detection sensor system operates by scanning the area ahead of the car.

If a cyclist heading in the same direction as the car suddenly swerves out, making a collision imminent, there is an instant warning and full braking power is applied.

The technology caught the attention of the GMP, who identified that it will likely have its largest impact in busy inner city areas like Manchester.

Operation Grimaldi has seen fixed penalties issued to cyclists for running red lights, not having lights fitted, cycling on footpaths and using mobile phones while cycling.

Ian Wiggett, Assistant Chief Constable of Greater Manchester Police, added: “We’re very pleased to be collaborating with Volvo as we work together to help engage cyclists in Operation Grimaldi.

“The Cyclist Detection system is a fantastic piece of safety technology and we look forward to using it to educate road users over the coming months.”