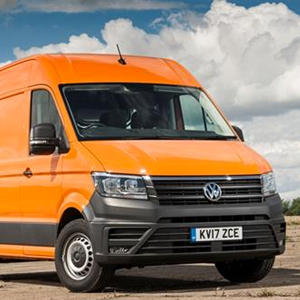 Volkswagen Commercial Vehicles’ newly developed Crafter is yet again in the limelight after winning the award for ‘Best Van’ at the Parkers New Car Awards 2018.

The Parkers Awards have been shaped by a detailed analysis of Parkers.co.uk traffic and reflect the views of Britain’s car buying public. This year, Parkers New Car Awards have revolutionised the awards sector by partnering with sister brands from Bauer Media’s portfolio of more than 100 influential digital and print titles, and radio stations. Winners were chosen based on the buying habits of the website’s 2.9+ million users* actively involved in the buying process.

The all-new Crafter, which made its UK debut at the CV Show in Birmingham in April and went on sale in May, has picked up a host of awards since it was revealed last September. Built at an all-new factory in Wrzesnia, Poland, and designed from the bottom up to meet the needs of van operators, it is available with a variety of different powertrains, drivetrains and capacities, offering maximum flexibility, and with a comprehensive suite of innovative technologies. As on all Volkswagen vans, the Crafter comes as standard with autonomous emergency braking and automatic post-collision braking systems – a first in the van sector.

Director of Volkswagen Commercial Vehicles, Carl zu Dohna, said: “This is a fantastic result and builds on what has been an incredible year for the Crafter. The Crafter is a game-changer for the brand and I am really proud of the recognition it has achieved this past year. Awards from prestigious platforms like Parkers.co.uk are the result of the high level of innovation that has gone into designing and manufacturing of the vehicle. We will continue to meet our customers’ wishes by delivering a total support package which reflects the quality of the vehicle itself.”

Editor of Parkers Vans, CJ Hubbard added: “Volkswagen has made excellent use of the opportunity for a clean-sheet design with the latest Crafter. That there’s plenty of load volume goes without saying. What really stands out is this large van’s ease of use – from the astonishingly undemanding driving experience to the exceptional cab environment, it seems like a genuine evolution of the breed.”