‘Best Mini in the UK’ sells for £17,000 at ‘fiercely competitive’ BCA fleet and lease auction 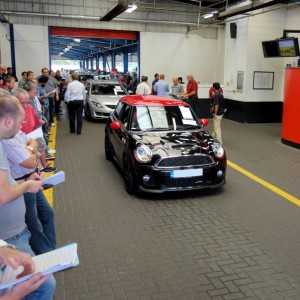 A top-of-the-range de-fleeted Mini – described as the ‘best in the UK’ – has fetched almost £17,000 at a British Car Auctions (BCA) sale in Blackbushe.

The event, which took place last Wednesday, saw the high-spec vehicle, a John Cooper Works with Chilli Media Pack, go to a Live Online bidder for £16,900.

Fitted with nearly every extra available, the car originally cost more than £30,000 and had covered just 24,000miles since its 2011 registration.

Phil Kelly, National Account Manager at BCA, said: “This was probably the best specified Mini anywhere in the UK and there was some fiercely competitive bidding from buyers in the auction hall and online.

“The final bid of £16,900 was well ahead of expectations and underlined that this car was a one-of-a-kind with every extra you could possibly want.”

Boasting a 225hp-tuned engine with sports suspension, the Mini had an interior finished in Carbon Black with Chilli red accents.