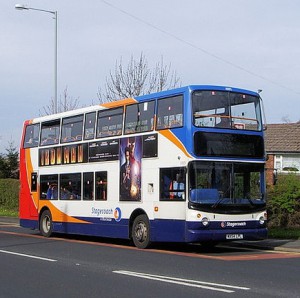 BOUNTY: Stagecoach to benefit from grant

More than 200 new low-carbon buses are set to hit Britain’s streets after the government settled distribution of £12million worth of funding.

The bounty – released as part of round four of the Green Bus Fund – will be split among 14 bid winners, including eight bus operators and four local authorities.

Local Transport Minister Norman Baker, who made the announcement, said 83 single-deckers and 130 double-deckers will be produced, as the government look to cut emissions and boost economic growth.

Around £7.5million will be spent on buses operated by the City of York Council, Nottingham City Council, Transport for Greater Manchester and Transport for London.

Meanwhile, £4.1million will be spent on operators including Stagecoach and First Group.

“The last three rounds of the Green Bus Fund have shown that bus operators and local authorities are keen to invest in environmentally friendly technology,” he said.

“It is encouraging to see this strong interest in ultra-low emission vehicles continuing through the fourth round of the fund.

“I’m glad these new technologies are breaking through into the mainstream.

“This further strengthens the case for operators in the UK to invest in ultra-low emission technologies and achieve a step change in cutting carbon.”

Across four rounds of the £87million fund, more than 1,200 new low-carbon buses will have been delivered in England, saving around 28,000tonnes of CO2 emissions per year.

Mr Baker added has asked his department to explore further options for green initiatives, to make full use of the remaining funding available this financial year.

Image courtesy of David, with thanks.