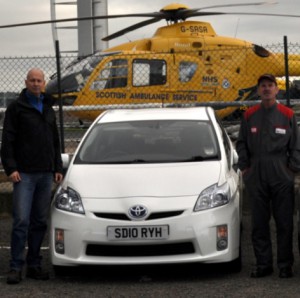 MPG: Toyota Prius made even greener

A Toyota Prius electric hybrid owner is making his environmentally-friendly car even greener by converting it to also run on autogas LPG.

Mike Gilluley, from central Scotland, is enjoying fuel consumption figures of effectively 120mpg, given autogas LPG costs half as much as petrol.

Mr Gilluley has converted his previous cars to autogas LPG, saving up to 40% annually on his car fuel bill.

“I’ve had the LPG bug for a long time and realised way back that it is an absolute ‘no brainer’ in that instantly upon converting the vehicle your fuel costs are all but halved,” he said.

“There’s something nice about pulling up at the pump and seeing the cost of autogas LPG versus petrol and diesel.

“Of course, the environmental angle is also incredibly important and one of the reasons I drive autogas LPG powered cars.”

Autogas LPG-converted cars resell for up to £1,000 more than if they were just petrol models – and more quickly too.

Paul Oxford, Business Development Manager at Autogas Limited, added: “Mick’s a great example of how passionate autogas LPG vehicle owners get thanks to the fuels low price at the pump and its better environmental credentials than petrol or diesel.

“We’ve always long suspected that autogas LPG users are extremely loyal and Mick is proof of this.

“However, the benefits of driving on the cheaper fuel are also enjoyed by 170,000 other car owners in the UK, so he’s definitely not alone.”