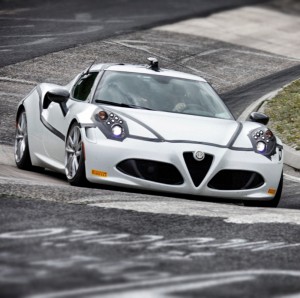 Alfa Romeo’s new 4C is the new record-holder for the fastest-ever lap round the Nurburgring’s Nordschleife by a sub-250HP car.

Horst von Saurma, driver, journalist and Nordschleife expert, was behind the wheel when the record was broken on September 12.

The 4C – which achieves 0-62mph in 4.5seconds and a top speed of 160mph – was kitted out in Pirelli Zero Trofeo tyres, the sportiest version in the Pirelli P Zero line.

Used by manufacturers worldwide as a development track, the Nordschleife offers a unique configuration that alternates slow and fast curves, and straight stretches and undulations.